Culpable Homicide and Murder in Singapore 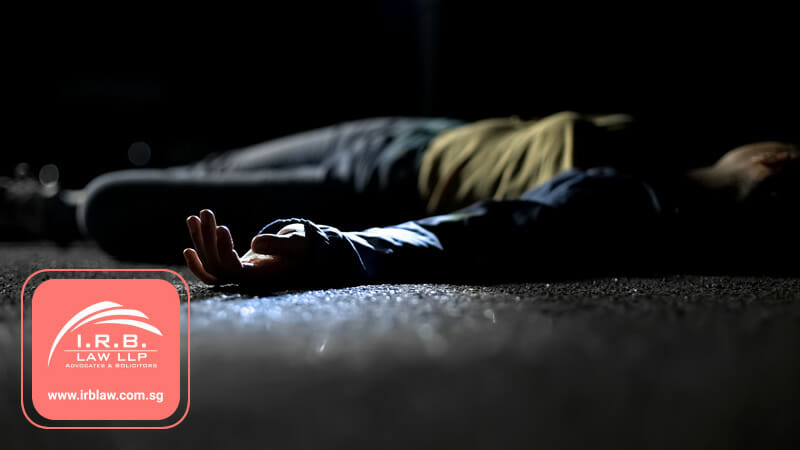 In Singapore, killing someone is primarily covered under the offences of murder and culpable homicide, as well as related offences such as causing death by rash or negligent conduct. Culpable homicide and murder are distinct crimes with distinct penalties. This distinction is critical since the death sentence is the maximum punishment for murder, but culpable homicide carries a comparably lighter jail term, as well as possible caning and a fine.

There are three ways for a person to be found guilty of culpable homicide not amounting to murder under section 299 of the Penal Code. These are if the individual performed an act involving the:

This offence is less severe than murder. Even though it is not punished by death, this offence is nonetheless penalized by harsh penalties. Because murder is regarded as a subcategory of culpable homicide, the requirements for culpable homicide, found in section 299 of the Penal Code, are quite similar to those for murder. Culpable homicide not amounting to murder occurs when an offender causes the death of another person with the intention to inflict bodily injury likely to cause death or with the knowledge that his or her act was likely to cause death.
In other words, the crime tackles instances in which the offender’s level of blameworthiness was reduced due to a decreased understanding of the likelihood that his or her action would result in death. If the prosecution cannot establish that the criminal had the mental condition needed for a charge of murder, the offender may be prosecuted for this offence instead.

The punishment for a culpable homicide that does not amount to murder is determined by the offender’s mental state at the time of the killing. If death was caused with the intent to cause death or physical injury likely to cause death, the perpetrator would be sentenced to life in prison with caning or up to 20 years in prison with a fine or caning.

The following are the punishments for attempting to commit culpable homicide based on whether or not hurt was caused:

Murder is a highly serious offence that carries harsh penalties. According to section 300 of the Penal Code, a person commits murder if he or she kills another person while in any of the following states of mind:

Furthermore, even if the offender did not plan to kill the real victim but rather someone else, it is still considered murder in Singapore under Singapore law. This refers to circumstances in which a bystander is accidentally killed instead of the intended victim. In such cases, the criminal would still face murder charges.

Even if no one died as a result of one’s actions, one can still be charged with attempted murder under section 307 of the Penal Code if the conduct was done with the intention of causing death. The punishments for offenders who commit this secondary offence of attempted murder are determined by whether or not they caused hurt to others.

Under section 302(1) of the Penal Code, a person found guilty of murder will be sentenced to death for doing something with the intention of causing death to the victim.

Judges, on the other hand, have the discretion under section 302(2) of the Penal Code to sentence the offender to death, life imprisonment, or caning if they committed murder through any of the ways described in points 2–4.
If the offender’s conduct outraged the community’s sentiments, the sense of being such a severe affront to humanity and repugnant that the death sentence would be appropriate, the death penalty will be imposed above life imprisonment. The court is likely to decide that the criminal’s conduct would outrage the community’s sentiments and that the death sentence should be imposed if the perpetrator had acted viciously or with a flagrant disdain for human life.

Punishments for Attempt to Murder

The following are the punishments for this secondary offence of attempted murder, which are based on whether or not the perpetrator caused hurt as a result of their actions:

If one or more of the special exceptions to murder mentioned in section 300 of the Penal Code can be successfully proven, a charge of murder can be reduced to culpable homicide not amounting to murder. The following are among the exceptions:

• When the offender had lost control of his or her actions as a result of a severe and unforeseen provocation;
• When a murder occurs as a consequence of a sudden fight and the perpetrator does not take advantage of the situation or act cruelly;
• When the perpetrator had the right to self-defence yet exceeded it to murder someone;
• When the perpetrator was acting in good faith and exceeded the power of a public servant;
• When the offender had a mental impairment, which meant that his or her mental capacity was seriously affected;
• When a woman murders her child while the child is under the age of 12 months;
• When the victim is over the age of 18 and has consented to the risk of being killed;

The victim was a friend of the accused’s family. The accused went to the victim’s flat to borrow money on the day of the crime. He requested a loan from the victim to cover the deposit on his new property, but she informed him that she did not have the funds. The accused explored the rooms for valuables while the victim was in the bathroom and ultimately discovered a box of jewelry. He decided to steal the box, but he was caught red-handed by the victim, who tried to stop him. He begged her to hand up the package, but she refused. The accused strangled and choked the victim to death during the altercation. The accused’s sole defence during the trial was that he acted with the knowledge that his actions were likely to result in death. Under section 304(b) of the Penal Code, a conviction on these grounds might have resulted in a maximum sentence of 10 years in jail. The prosecution tried to establish that the accused acted with the intent to kill. Under section 304(a) of the Penal Code, a conviction on these grounds carries a potential penalty of life imprisonment or a sentence of up to 20 years in jail. The judge found the defendant guilty of violating section 304(a) and sentenced him to 18 years in jail. The prosecution filed an appeal, seeking the maximum punishment of life imprisonment under section 304(a). The accused challenged both his conviction and sentence, claiming that he should have been found guilty under section 304(b) instead. Both the appeals were dismissed by the court after hearing both the parties.

Teo Ghim Heng, who was convicted in the High Court of murdering his wife, Choong Pei Shan, and his daughter, Teo Zi Ning, filed an appeal. The court decided that the appellant’s arguments of diminished responsibility and grave and sudden provocation were insufficient to justify his conviction. The Judge further dismissed the appellant’s claim that the legislative provisions under which he was convicted were unconstitutional because they violated the separation of powers doctrine and/or were in breach of Article 12 of Singapore’s Constitution. After hearing the parties in the appeal, the court upheld the appellant’s conviction and sentence and dismissed the appeal.

The appellant was appealing her conviction for the murder of Mdm Seow Kim Choo under section 300(c) of the Penal Code. At the time of the incident, the appellant was an Indonesian national who worked as a domestic servant for the deceased and her family. The question on appeal was whether the appellant was entitled to the diminished responsibility defence, and, more specifically, whether the appellant was suffering from chronic depression illness with the intermittent depressive disorder at the time of the murder. After reviewing the submissions, the court concluded that the Judge did not make an error in ruling that the appellant was not entitled to the diminished responsibility defence. The components of section 300(c) Penal Code offence, as indicated in the charge, had also been proven beyond a reasonable doubt, according to the court. The conviction of the appellant was upheld. Because neither party challenged the sentence, the court upheld the judge’s decision to sentence the offender to life in prison.