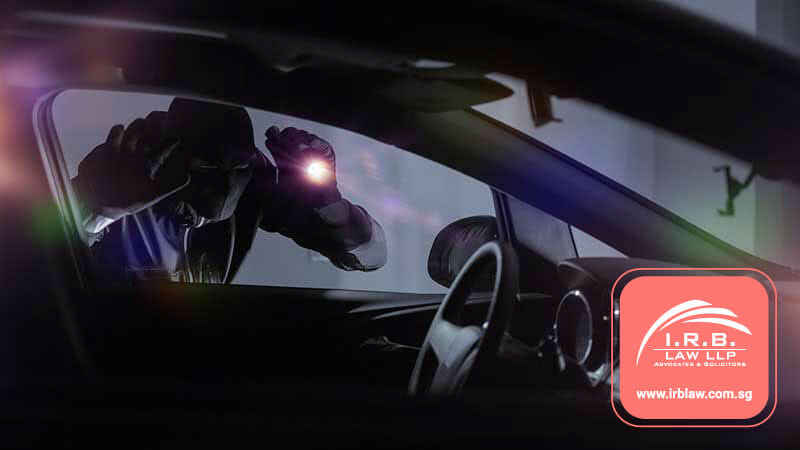 On 23 July 2017, a man allegedly boldly reached for the wallet of his Grab car driver and took about S$450.00 in cash. Footage of this offence was captured by an in-car camera, and the man has been arrested. Shockingly this incident is just one of the most recent cases of theft from vehicles in Singapore.

The Rise of Theft from Vehicles in Singapore

In 2016, there were 1,107 motor-vehicle related thefts, including the theft of items from vehicles. Five individuals suspected of theft in cabs and private hire cars were arrested in December 2016 alone. Everyone ought to know that crime does not pay, but we at I.R.B. Law LLP believe that it is worth remembering the consequences as well.

Under section 378 of the Penal Code (Cap 224), theft is described as intentionally and dishonestly taking another person’s belongings without that person’s consent. It is important to remember that ‘taking’ can also mean simply moving the item from one place to another, with the intention to eventually take the item(s) for yourself or your use.

What about Theft from Someone’s Home?

In the special case that a person is staying in the vehicle (like a motorhome) and if that person was treating it as a home, that vehicle may count as a ‘vessel’ under section 380 of the Penal Code. Taking things from such a vehicle may be regarded as theft in a dwelling, which is a more serious charge.

What Items Count Under Theft?

For the offence of theft, an accused can be charged if he or she takes any movable item. Movable item as the name suggests can include items such as mobile phones, cash, shoes, or any other such items.

Theft of a Motor Vehicle in Singapore

In the context of cabs and private hire cars, stealing the car itself or even parts of the car (for example car decals, or hood ornaments) will then turn the charge into a theft of a motor vehicle under section 379A of the Penal Code.

What is the Sentence for Theft in Singapore?

If you have had previous convictions for theft, you may be liable for a more severe sentence.

What Should I Note as A Driver?

With your eyes on the road most of the time, it can be hard to keep track of what is happening in your car. Here are some tips on how to protect yourself as best as you can:

The IMEI number can be used to block stolen phones from accessing networks. Please refer to your phone’s user guide on how to find your IMEI number.

What if Somebody Stole From Me?

If you suspect that a passenger has taken something from you, be sure to review any in-vehicle camera footage and take note of details such as the date and time of the event. You should also make a clear list of what was taken, including an estimate of how much money was taken, if any. If your mobile phone was taken, be sure to have your IMEI number on hand.

With these details, file a police report as quickly as possible at a Neighbourhood Police Centre or Neighbourhood Police Post. Click on this link (https://www.police.gov.sg/resources/prevent-crime/theft-from-motor-vehicle#content) for the typical police procedure after a report.

If there is a hearing on your theft case and further complications arise, you should consult a lawyer on how best to proceed. Such situations usually arise where the evidence is not clear, and a lawyer can help you outline the best path to take to ensure that justice is served.

What if I Am Charged With Theft?

If you are facing a charge of theft but do not think you have committed the offence, you will need to prove that your actions do not fulfill the elements of theft.

For example, you will need to prove that you had a genuine belief that the item’s owner agreed to let you move or take the item. Otherwise, you need to show that you did not move the item with the intention of taking it from the owner.

If you were caught with stolen items but believe you have been framed, you will need to prove this. The police can assume that you committed the offence if the stolen goods are found on you, so it will be up to you to prove your innocence.