Bribing An Officer Of The Law in Singapore 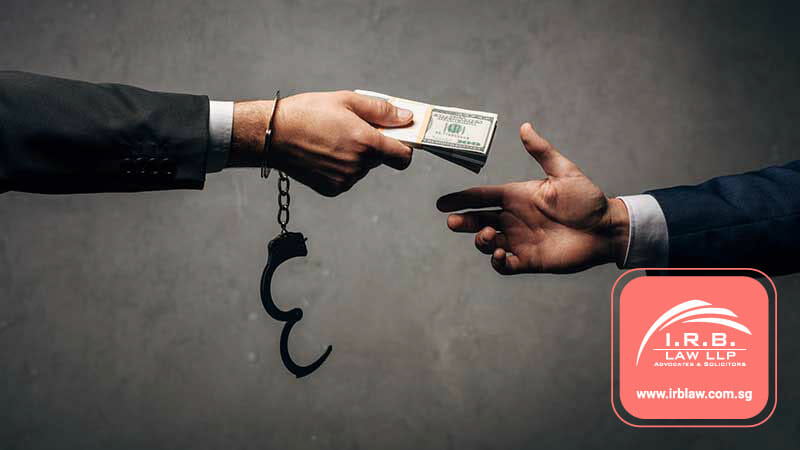 As of 2017, Singapore is the only Asian country to have made it within the top 10 of the least corrupt countries in the world. Singapore is now at the 7th position on Transparency International’s Corruption Perceptions Index. It is worth noting that Singapore’s anti-corruption laws, namely the Prevention of Corruption Act (PCA), has been proven effective in many cases, where bribery attempts have been rejected and referred to the Corrupt Practices Investigation Bureau (CPIB) and Singapore Police Force (SPF).

Indeed, Singapore adopts a zero-tolerance approach to corruption. I.R.B. Law LLP explains the possible consequences if someone attempts to bribe an officer of the law in this article.

Attempting To Bribe An Officer; Consequences Of Recent Cases

On November 20, 2017, Devika Maruvan, a salesperson at Tekka Centre, was jailed three weeks for stealing from her employers and three weeks for attempting to bribe a public officer. The Malaysian national tried to bribe SPF’s Sergeant Lim Mei Jing to avoid being arrested for stealing from the shop she was working at. She was charged with a harsher sentence after the officer rejected the offer and arrested her.

In another recent case on October 12, 2017, a woman was sentenced to three months’ jail for trying to bribe an Immigration and Checkpoints Authority (ICA) officer with S$200.00 at Changi Airport. Lin Xiurong, a Chinese national, had flown into Singapore from Thailand. While she was being escorted to the Immigration Duty Officer counter for further questioning, she pulled out four S$50.00 notes and stuffed it into the ICA officer’s jacket pocket as a bribe to allow her entry into Singapore. However, the officer refused the bribe and made a report with CPIB.

Catherine Lim Zhi Yin was an officer from the Immigration and Checkpoints Authority (ICA). She was charged in Court on September 20, 2017, for accepting $1,680.00 in bribes between December 2014 and February 2015. The officer was charged with seven counts of corruption, as she had received money from Raymond Lim Boon Ian in exchange for granting 30-day social visit passes to various women.

Punishment And Penalties For Bribery

Under the PCA, the punishment for corruption is a fine not exceeding $100,000.00 or to a jail term of not exceeding 5 years or both. However, the maximum jail term would be increased from 5 years to 7 years if the transactions involve the Public Service or if the bribery target is a member of parliament or a public servant.

Additionally, if the gratification involves a sum of money or if a value can be attached to the gratification, the Court may order the offender to pay a sum equal to the amount of gratification received as a fine. Hence, it is possible for the fine to exceed $100,000.00 as in the recent case involving a Petrochemical Corporation of Singapore marketing and sales executive who was ordered to pay a fine of $1.13 million for corruption.

What Exactly Is The Prevention Of Corruption Act?

The Prevention of Corruption Act (PCA) is the primary anti-corruption law in Singapore. The PCA empowers the CPIB and governs and defines corruption and their punishments.

Under the PCA, it is an offence for a person to:

any gratification as an inducement to or reward for:

The PCA creates a presumption of corruption where any gratification is proven to have been given or received by a person in the employment of the Government of Singapore or of a public body. The burden of proof to rebut the presumption lies with the accused.

The PCA itself has extra-territorial effect and Singapore citizens committing corruption or bribery overseas may be charged under the PCA. Under Section 37 of the PCA, non-citizens may be investigated and prosecuted in Singapore if they abet the commission of a corruption offence related to Singapore. One such case was in 1998, where Mr Taw Cheng Keong, based in Hong Kong as the Asia Pacific regional manager of the Singapore Investment Corporation Pte Ltd (GIC), was charged under section 37(1) of the PCA for accepting “incentive fees” from Kevin Lee of Rockefeller & Co Inc New York to cause GIC to perform certain transactions at Lee’s instigation.