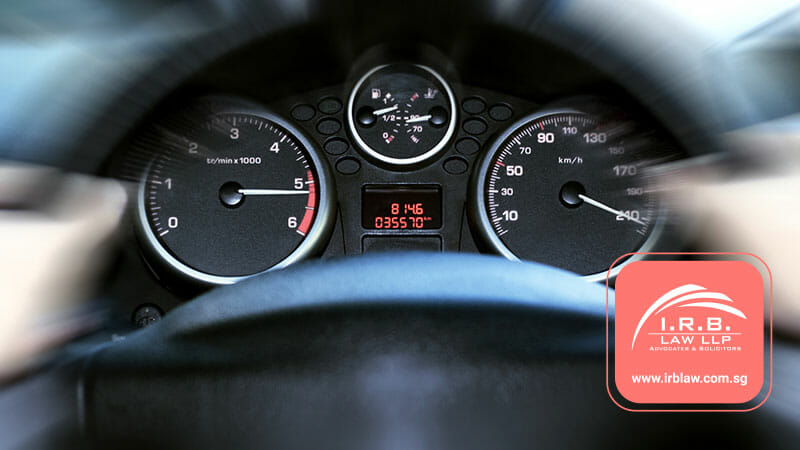 Caution on the roads is important and adhering to speed limits is not just safe, it’s the right thing to do. It can also save you a lot of money and keep your driving record clean. Despite such logic, exceeding the speed limit remains one of the most common traffic offences in Singapore.  It can happen to anyone. Knowing the law and the legal consequences of speeding can help you to be aware and cautious on the roads.

If you get caught speeding in Singapore, you will accumulate demerit points against your record. In addition, you will have to pay a fine or appear in court. In more serious cases or repeat offences, you may face having your license revoked or suspended.

Speeding is what is known as a strict liability offense, which means that as long as you are caught operating the vehicle in excess of the speed limit, you have a committed an offence even if you did not actually intend to exceed the speed limit.

That being said, there may be unique circumstances under which the police or prosecution might be minded to exercise a certain degree of prosecutorial discretion either not to charge a person with an offence, or perhaps to charge the person under a less serious offence. For example, driving in a dangerous or reckless manner will invite more serious penalties than merely exceeding the speed limit.

Road traffic and speeding offences are governed by the Singapore Road Traffic Act. Section 63 of the act states that it is an offence for any person to drive a motor vehicle of any class on a road at a speed above the specified speed for that road, either generally, or at a specified time.

The specified speed will depend on the type of road, the road users (for example, scholars) and the surrounding area (residential, industrial, agricultural, etc). In general, the speed limit ranges between 30 km/h to 70 km/h for normal roads.

What are the speed limits on Singapore roads?

Section 2 of the Road Traffic (Restriction of Speed on Roads) Notification specifies speed limits. Schedule one to six determine limits on specific roads.

Similarly, the speed limit is 30 or 40 km/h in a silver zone. A silver zone is any part of a road between traffic signs indicating the beginning and the end of a silver zone to enhance road safety for senior pedestrians to cross the road.

If no specific limit or restrictions are specified for a particular road, the limit is 50 km/h.

The Land Transport Authority imposed additional speed limits depending on the weight and capacity of a vehicle. The speed limit remains 50 km/h for all cars, motorcycles, buses, coaches and light commercial vehicles (up to 3.5 tonnes and/or a seating capacity of 15 passengers) on normal roads.

On expressways, buses and coaches may only travel at a maximum speed of 60 km/h and light commercial vehicles are limited to 60-70 km/h. Cars and motorcycles may travel up to 70-90 km/h on expressways.

Fines for exceeding the speed limit differ between heavy vehicles and light vehicles.

What are the Penalties for Speeding?

Penalties for speeding include:

Demerit points are not permanent, they can be removed from your record.

How are demerit points removed from your record?

If the driver does not accumulate any more points for 12 consecutive months after the last offence, the points can be removed.

In addition, if the driver qualifies to sign up for the Safe Driving Course (SDC), the driver can have 4 demerit points removed from their record by completing the course successfully.

Who qualifies for the SDC?

The driver must have a valid driver’s license.

If the driver has no existing suspension record and have accumulated 8 to 23 demerit points.

If there is an existing suspension record and have 4 to 11 demerit points.

Furthermore, a driver will not be eligible for the SDC if the driver completed the SDC in the past year.

Take note that eligible drivers can only sign up for the SDC a maximum of two times within 10 years.

In addition to demerit points, the driver will have to pay a fine, or face prosecution, depending on the speed.

In simple terms, a composition fine refers to paying money to avoid prosecution in court. The amount of the fine will depend on the speed and the weight of the vehicle.

If you don’t pay the fine before the offer expires, and you don’t plan on contesting the charge, you will have to pay the court fine, which will be higher than the initial composition fine.

Fines can be paid at any AXS machine.

The amount of a composition fine currently ranges between $150 to $300 for light vehicles and between $200 to $400 for heavy vehicles, depending on how much the driver exceeded the speed limit by.

Exceeding the speed limit by more than 40 km/h is regarded as a serious offence. In such cases, the driver will not be offered a composition fine instead of prosecution. You will have to appear in court.

If a person is a repeat offender of exceeding the speed limit by more than 40 km/h, section 67(A) of the Road Traffic Act authorises the court to impose a punishment of three times the punishment that the court would have imposed for a first offence, subject to a maximum of 10 years imprisonment.

Suspension or revocation of a driving license

Section 45 of the Road Traffic Act grants the Deputy Commissioner of Police, the power to suspend a person’s driving license if it is not in the interest of public safety for a person to hold a driver’s license, or the person is not competent to drive a motor vehicle. The demerit points system is designed to identify such drivers. Liability for suspension and revocation depends on the driver’s status and previous record.

If a probationary driver or a new driver who is under probation for one year from when the license was granted, accumulates 13 or more demerit points in that year, their license will be revoked. This means the license is invalid, and the license holder will have to re-apply and retake all the required driving tests (theory and practical) to obtain a new license.

A driver with no previous suspension record, who accumulates 24 or more demerit points within 24 consecutive months, will face a first suspension of 12 weeks.

A driver with a previous suspension record will become liable for subsequent suspension if the driver accumulates 12 or more demerit points within 12 consecutive months.

The period of suspension will depend on how many times the driver’s license was previously suspended.

From the 3rd suspension and onwards the card will not be returned, the license will be revoked and the driver will have to take all the tests to be able to drive again.

Can the suspension period be reduced?

First and second suspension drivers can be offered a DIPS retraining course. If completed successfully, the suspension period can be reduced.

How will speeding offences impact your future?

As mentioned previously, demerit points are not permanent and 12 months of good driving behaviour can clear your record.

Speeding offences are not registered under the Registration of Criminals Act, and therefore you will not have a criminal record due to speeding offences. Take note, however, that any conviction of death by reckless or dangerous driving in the course of speeding, will appear on your criminal record. It will require 5 years of crime-free behaviour before such a record can be spent.

Speeding remains a dangerous and serious offence. Accumulating demerit points or having your driver’s license revoked or suspended can impact your daily life significantly