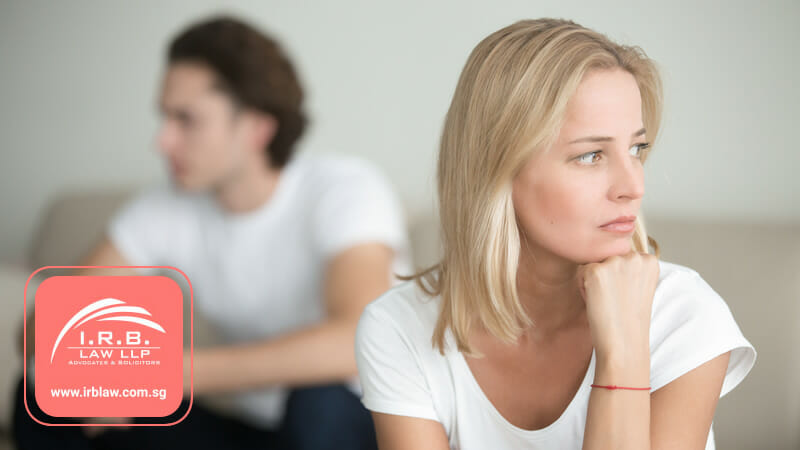 It’s significantly more traumatic to fall out of love than it is to fall in love. A person may need to spend some time apart from their spouse to determine whether the relationship is worth saving or whether the breakup should be permanent. As difficult as this period may be, one should take stock of the situation and choose how they would want to approach their separation. Before deciding on a divorce, one may prefer to be apart from their spouse for a length of time. If the parties want to separate but don’t want to file for divorce right away, they can strike an informal arrangement by mutual consent in the form of a Deed of Separation. The conditions and restrictions governing the relation between husband and wife during the separation period are laid out in a Deed of Separation.

In Singapore, the Deed of Separation is a written agreement between husband and wife that governs the period during which the couple remains legally married but lives apart, either separately or under the same roof, but without maintaining familial connections. The registration or filing of the Deed of Separation with the court or any other entity is not required under Singapore law. As a result, the Deed remains a private document between the spouses, who can conceal its existence from anybody, including family and acquaintances, for as long as they choose.

Need for Deed of Separation

1. The couple has chosen to divorce, but they have not been married for 3 years. According to Singapore law, a couple must be married for at least 3 years before they may obtain a divorce. People might not always want to wait so long before continuing with their life.

2. The parties have agreed to divorce but do not intend to do it right away. Even if the marriage has been in place for more than 3 years, the parties may choose to remain legally married for the sake of their children or HDB property.

3. You may not have chosen to divorce but would like to live apart for a while. A party is still considering divorce but needs proof that the period of separation has begun.

6. If you have not met the Minimum Occupancy Period (MOP) for selling your HDB apartment. If couples divorce during the MOP, they will be compelled to return their unit to HDB at prevailing market prices. If they wish to keep their HDB apartment at this time, they might consider getting into a Deed of Separation with their partner.

7. You want to handle all ancillary matters as amicably as possible with your spouse. When you file for a new divorce, your spouse may oppose many of the ancillary issues, such as child custody or the distribution of marital assets, which might lead to lengthy and protracted court processes. However, if you have previously made attempts to reach a consensual agreement with your spouse on how to manage such items through your Deed of Separation, and your spouse is receptive to such an arrangement, you may be able to skip such lengthy processes completely.

Benefits of Deed of Separation

1. Wish to separate while staying married for religious or other reasons.

2. Prefer not to divorce while the children are too young.

3. Are attempting to avoid the possibility of a disputed divorce and the high expenses associated with the subsequent litigation.

4. Have chosen to divorce but desire to postpone it for various reasons while having assurance on ancillary issues.

5. Are hesitant about the divorce but desire to begin living apart and must resolve so-called ancillary issues such as child custody and asset distribution.

6. Intend to continue living in an HDB flat throughout the minimum occupancy term to maintain it after divorce.

7. Want to set a start date for their separation in writing so that they may start a countdown and file for divorce based on separation.

The Deed of Separation will often include provisions such as:

A Deed of Separation’s contents is quite similar to the judgment orders often given during the ancillary hearing stage of divorce proceedings. However, unlike a judgment order, which can be made unilaterally by a court after hearing the parties’ arguments, one gets to negotiate the conditions of the Deed of Separation before it is signed.

Difference between Separation and Divorce

When you get divorced, it indicates that your marriage has ended. In other words, you are free to choose another companion and even marry that individual. However, with a separation, the marriage legally continues to exist, although it may be on the verge of divorce. Separation can thus be viewed as a forerunner to divorce. Certain conditions must be satisfied under the Women’s Charter before one may seek divorce. For example, one must be able to demonstrate the irretrievable breakdown of the marriage. However, unlike divorce, there are no statutory criteria for separation. One also does not have to wait any length of time before seeking a separation. While the Deed of Separation provides the conditions for settling ancillary issues following divorce, the couples remain legally married during the separation. In Singapore, getting a divorce requires submitting a separate divorce application with the Family Justice Courts.

Cost of Deed of Separation

The cost of preparing a Deed of Separation is often determined by the intricacy of the deed to be drafted, as well as how the lawyer charges for their services, among other things. You should anticipate paying a greater price for more complex separation agreements (for example, where there are several private properties, enterprises, or trust monies that must be divided between the spouses). Some lawyers might also charge a flat fee or an hourly cost to prepare the Deed of Separation.

Registration of Deed of Separation

It is not necessary to register a Deed of Separation with the Registry of Deeds in Singapore for the conditions of the deed to be enforceable. As a result, it is completely up to you whether to keep the deed secret between you and your spouse or to register it with the Registry of Deeds. However, if your Deed of Separation deals with property titles, it must be registered. If you do not register such a deed, you will be unable to submit it in court as evidence of your interest in the property in question.

Setting Aside a Deed of Separation

A Deed of Separation’s terms can be set aside or changed. Normally, a court will overturn the deed if there are compelling reasons to believe that continuing to uphold the deed will result in grave injustice between the parties. You can also opt to end the deed on your own terms. This is usually the situation when you have reconciled with your spouse and no longer desire to be separated. Furthermore, the court can amend the provisions of the deed to make it fairer and more equitable, especially if the circumstances under which the deed was originally formed have changed dramatically.

Because the deed is essentially a settlement agreement, you can sue your spouse if you discover that he or she has violated the provisions of the Deed of Separation. This also applies if your spouse denied access to the kid or refuses to depart the matrimonial home after having agreed to do so. In such cases, the court may maintain the conditions of the Separation Deed and issue a court order compelling your spouse to either give access or leave the residence. Breaching the terms might potentially result in harsh consequences. In addition to being sued, the court may consider your actions in evaluating ancillary matters in any subsequent divorce application.

Following a brief marriage, the parties entered into a deed of separation that outlined their dissolution. The wife then filed for divorce based on three years of separation. This was uncontested, and an interim order was issued. During the hearing on ancillary matters, the wife requested that the Deed be set aside owing to undue influence. The husband wanted to maintain the Deed’s legality while varying the incidence of care and control over their sole child, who remained with the wife under the conditions of the Deed. The High Court judge ruled that the Deed was entered into freely and voluntarily and that there was no reason to overturn it. The Judge deviated from the Deed on the division of marital assets and the amount to be paid in child support in her decisions on ancillary matters, but she did not change the care and control arrangement. The husband challenged the Judge’s decision to vary the Deed on the grounds of division and maintenance, as well as the Judge’s unwillingness to change the agreement on care and control. The appeal was allowed in part. The monthly maintenance of the child to be paid by the husband was altered and the court allowed liberal access of the child to the husband, although the care and control of the child remained vested with the wife.

After a 28-year marriage, the couple divorced. Shortly after, on March 28, 2003, the parties executed a separation deed and divorced three years later. The Deed allowed for the division of certain marital assets between Plaintiff and Defendant. Plaintiff claimed during the ancillary hearing that the Deed should be given full weight when splitting the assets and that the contents of the Deed should be adopted in the court orders. Both parties prepared reports detailing the pool and value of assets subject to partition under the Deed. Defendant claimed that some assets were left out of the Deed and attempted to include them in the pool of marital assets. The court after scrutinizing the deed of separation altered some of the terms of the agreement as it had the power to do so and ordered the parties to carry out the terms of the Deed.

The validity of a deed of separation entered into between the parties after their marriage had failed was at the heart of the argument. During the discussions, the husband hired a lawyer and negotiated the conditions of the divorce with his wife. The wife did not acquire the services of a lawyer. The key stipulations of the Deed were that the wife would pay the husband $250,000 for his portion of the marital house and that she would not seek maintenance from him. The husband attempted to persuade the court that the deed of separation should not be upheld since the wife had pressured him into signing it. The question was thus whether the Deed should be upheld. The court found that the husband had entered into the deed of separation willingly. He was certainly not coerced by his wife to sign the Deed in the presence of his lawyer and that it was just and equitable to uphold the deed of separation.