Guide to Divorce in Singapore 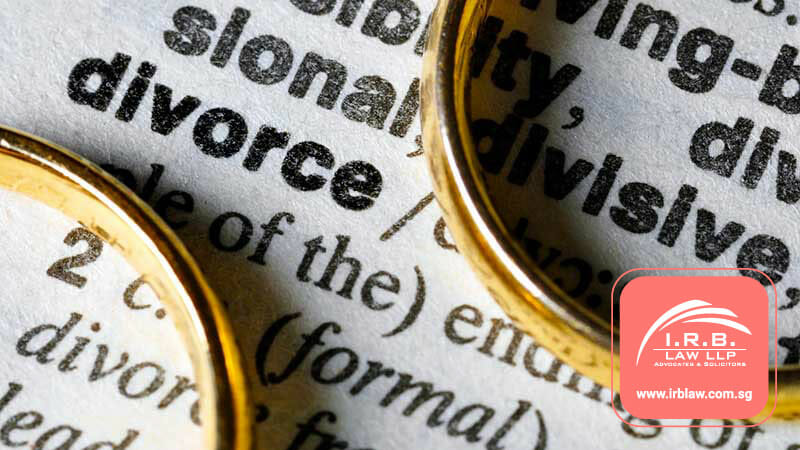 Welcome to our article on Divorce in Singapore. If you prefer to listen, we have an introduction to the topic from IRB Law partner Muntaz Binte Zainuddin.

In addition, the parties must have been married for a minimum of 3 years. Although the Court has the discretion to depart from this requirement, it rarely ever does so except in cases where there has been unbearable hardship or exceptionally cruel behavior.

Please note that getting a divorce is quite different from getting an annulment. A divorce is where an existing marriage is dissolved, whereas in the case of an annulment, technically the marriage did not take place. There is no requirement of having to be married for at least 3 years before a marriage can be annulled. On the contrary, an annulment is usually more likely to be granted at an earlier point in the marriage than later. However, an annulment is only granted by the Court under very specific circumstances.

Note: If you were married under Muslim Law, the previously mentioned requirements do not apply to you. Please check on how to divorce under the Muslim Law instead.

Two stages in a divorce

There are two main stages in a civil (i.e. non-Muslim) divorce in Singapore:

Stage 1: The dissolution of the marriage

Stage 2: Ancillary Matters (matters regarding custody of a child, division of matrimonial properties and maintenance)

Whether or not the above situations have been proven will be a question of fact that has to be proven in Court and trial if challenged by the other party. A trial is a lengthy process involving the production of witnesses, hearings, and ultimately a judgement by the Court. If parties agree that irretrievable breakdown has occurred for any of these reasons, then a trial will not be necessary.

It is important to note that under Singapore law, the reasons for the breakdown of the marriage are usually not considered by the Court when deciding on the ancillary matters. There may be no or little advantage to be gained by either party proving that the other party has been “wrong” or “immoral”. Your lawyers would be able to advise you where the breakdown of the marriage may affect the ancillary matters.

If the Court is satisfied that the marriage has broken down irretrievably (whether proven in trial or by consent between parties), it will grant an interim judgement to dissolve the marriage, whereupon the divorce proceedings will proceed to stage 2 – Ancillary Matters.

The ancillary matters to a divorce deal with the following three issues:

There are three issues to be decided in relation to the children of a marriage:

Custody of the children generally relates to the making of the major life decisions of the children, such as education, religion, medical treatment, or migration/relocation. As a general rule, if parties are unable to agree on custody, the Court tends to award joint custody to both parents.

Care and control refer to the main caregiver to the child and the parent whom the child will primarily live with after the divorce.

Access is given to the parent who does not obtain care and control. Access can come in many forms such as supervised, reasonable, liberal etc.

A husband is generally obliged to maintain both his wife and children (generally up to the age of 21) during and after the marriage. Whilst maintenance for children of the marriage is required, maintenance for a former wife may not be required in certain circumstances including short marriages or where the wife is earning well.

In a divorce, parties are free to agree on the amount of maintenance that is to be provided to the wife and children. If parties are unable to do so, the Court will make a finding, based on a number of factors, such as the standard of living enjoyed by the parties during the marriage, parties’ income (current and projected future), the length of the marriage, household expenditure, etc.

In establishing the above factors in Court, each party will have to produce the relevant proof of their contributions, such as by way of bank statements, invoices, etc.

Upon a divorce, the matrimonial assets (which are defined in law and may not include a matrimonial home acquired by inheritance) are to be divided amongst the parties, having regard to the direct (i.e. monetary) contributions to the acquisition of that asset, as well as indirect contributions, such as:

In establishing the above factors in Court, each party will have to produce the relevant proof of their contributions, such as by way of bank statements, invoices, contracts etc.

Sometimes, you may hear of what are described as “uncontested divorces” or “simplified divorces”. This is a situation where parties have agreed to the reason for the divorce, as well as all the ancillary matters described above.

From our experience, most divorces are uncontested for the following reasons:

Even where parties are initially unable to agree on the terms of the divorce, the Singapore Courts tend to discourage divorce litigation. Thus, even when parties commence divorce proceedings on a contested basis is it is common for the Courts to direct that parties attend mediation at an early stage of the proceedings.

With the aid of a mediator, most contested proceedings can be eventually resolved on an uncontested basis. For more detailed information you can read our article on uncontested divorce here.

You may wish to file a divorce without hiring a lawyer in order to save costs. However, do note that you are still subject to the procedures, formalities, and technicalities of the court proceedings. The court will treat you the same as the one who was represented by a lawyer and the Family Justice Courts will not provide legal advice for any divorce cases

An example of documents you would have to file to simply commence divorce includes:

There will be more documents to file if matters remain contested such as the Affidavit of Assets and Means and Submissions for the Court.

Please be advised to seek help from a divorce lawyer, especially if you can foresee that your spouse is going to contest the divorce or what the ancillary matters as the contest may lead to complicated and prolonged court proceedings.

After serving the above-mentioned documents on the Defendant, the Defendant gets 8 days to decide whether to contest the divorce.

Before the parties’ trudge into the court trial, which can turn out to be a bitter battle, parties can try to reach an amicable settlement by the following alternatives:

If such alternatives cannot resolve the divorce case in an amicable manner, the divorce case will be transferred to the court for Trial. The court will examine whether the marriage has irretrievably broken down.

If the court concludes that the marriage has irretrievably broken down, the court will grant an Interim Judgment, which is an order to dissolve the marriage. The court then proceeds to decide the ancillary matters.

If the total net value of the matrimonial asset(s) is exceeding SGD 5 million, the divorce case will be transferred to the High Court.

After the filing and exchange of documents, the court will set a date to hear the ancillary matters.

After the settlement of all ancillary matters, parties are required to wait for 3 months (from the date of Interim Judgment is granted) in order to apply for converting the Interim Judgment to become Final Judgment.