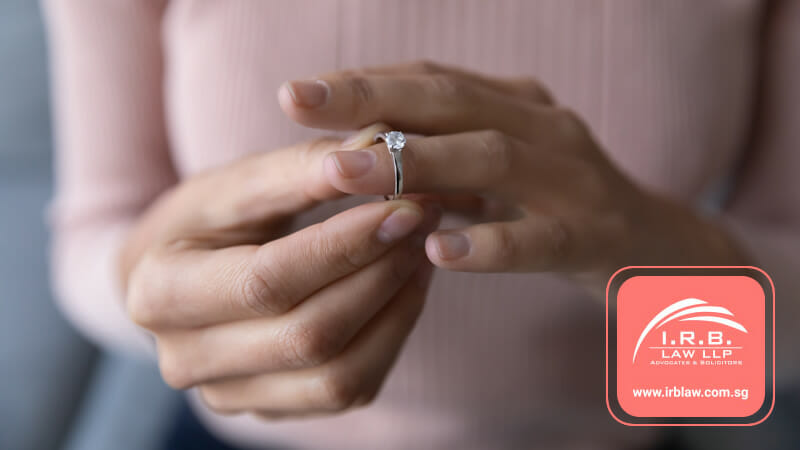 Every married couple goes through tough phases, sometimes right after their marriage. Such couples might soon realize that their marriage is not working out even before three years since such marriage. But in Singapore, a divorce proceeding cannot be commenced sooner than three years from the date of marriage. In such circumstances, a marriage can be annulled.

Is Annulment the same as Divorce?

No, annulment is not the same as divorce.

A divorce dissolves a marriage without denying that the marriage took place. Parties who are successfully divorced are known as “divorcees”. There is only one ground for divorce that is the irretrievable breakdown of the marriage which can be proven through the grounds of adultery, unreasonable behavior, desertion, or separation.

What is a Void Marriage?

Void marriages are those marriages that were never recognized under the law. This means that the marriage was invalid from the very start. Section 105 of the Women’s Charter mentions the grounds for marriages that are Void.

What is a Voidable Marriage?

Conditions for Annulment of Marriage

One does not need to be a Singaporean for the annulment of a void or voidable marriage. However, the married couple should be living in Singapore at the time of commencement of the annulment proceedings.

What do you need to do for the Annulment of Marriage?

If one is satisfied with the grounds for annulment of the marriage as well as the conditions required, then the following steps need to be followed.

3) Interim Judgment – After submitting all the required documents the Court may grant an interim judgment.
4) Settling Ancillary Matters – After the Court grants an interim judgment, the next step is to settle ancillary matters i.e, division of matrimonial assets, custody of the child(ren), and quantum of maintenance.
5) Judgment of Nullity – After the ancillary matters have been settled, the Court may grant the final Judgment of Nullity stating that the marriage is annulled successfully.

How much Time does the Entire Process Take?

If the other party does not challenge the claims for annulment, then the process would take 4 to 6 months for the Certificate of Nullity to be granted. The Applicant will be required to appear before the Court once.

However, if the other party contests the claims for annulment, the process would take longer to reach a conclusion depending on the complexity of the case.

What Happens When the Claims are Uncontested?

If the other party agrees with going for an annulment of the marriage, the procedure, in such circumstances, is relatively more straightforward. After the submission of the required documents the following steps are:

1) The other party will file a Memorandum of Appearance indicating that they are not contesting the annulment.
2) The applicant is required to sign the Affidavit of Evidence in Chief indicating that the documents filed prior are true and accurate.
3) The other party will sign a Draft Consent Order indicating that they have full agreement on the Ancillary Issues.
4) The applicant is required to attend an Open Court hearing and will be granted the annulment and an order-in-terms of the Draft Consent Order.
5) The Final judgment of Annulment will be received approximately 3 months after the hearing.

What Happens When the Claims are Contested?

If the other party challenges the claims for the annulment of marriage, the procedure takes much longer to reach a conclusion depending on the complexity of the case. Evidence needs to be put forth to back up all the claims by both the plaintiff and the defendant. Some defenses available to the other party are:

What Happens to the Child(ren) after Annulment?

Before the Final Judgment of Annulment is decided, the parents would need to settle the Ancillary Matters which involves the custody of the child(ren). As for the legitimacy status of the child(ren):

What about HDB Flats?

HDB rules stipulate that the flat must be surrendered to HDB if the buyers of the flats fail to satisfy at least 5 years of stay before disposing of the flat. Thus, if the Writ of Nullity is filed within the first 3 years of marriage, it is probable that the HDB flat has to be surrendered.

What to do after Unsuccessful Annulment of Marriage?

In case the application for annulment of the marriage is not successful, the parties are left with two options.

i) In case of marriage for less than 3 years, one can apply for permission to file for divorce early by proving exceptional hardship or depravity.
ii) Parties can also sign a Deed of Separation to live apart from each other until 3 years of the marriage have passed and can then file for divorce.

1) Writ of Nullity: It is a court application to the Singapore Family Justice Courts to invalidate a marriage due to a number of different reasons.
2) Statement of Claim: A statement indicating the alleged grounds for annulment.
3) Statement of Particulars: A statement backing your claims with the facts to prove them.
4) Proposed/Agreed Parenting Plan: Document stating the proposed or agreed arrangements for your children.
5) Interim Judgment: An interim judgment, granted at the end of the first stage of annulment, proves that a marriage was void or voidable.
6) Ancillary Matters: Ancillary Matters include custody, care and control of children, access, maintenance of children and ex-spouse and division of matrimonial assets.
7) Judgment of Nullity: A judgment of nullity proves that the marriage has been declared null and void.

In this case, the Court stated that there is a clear distinction between Void and Voidable marriages. In the case of a Void marriage, a third party, having an interest in the matter, can make out a case against the other party or parties relying on the fact that the marriage concerned was Void, to begin with. However, for Voidable marriages, only the spouses have the right to make out a case against the other party challenging their marriage to be annuled and can only do so during the lifetime of the other spouse.

In this case, the Court highlighted the fact that a third party cannot challenge the validity of a marriage in respect of Voidable grounds mentioned under Section 106 of the Women’s Charter. The judgment also stated that improper motives were not a ground for the annulment of marriage under section 105 of the Women’s Charter. The law does not allow for the identification of parties’ private motives to undermine the validity of the marriage. Even if such motives can be proved, it is irrelevant in considering whether the marriage is valid or not.

The Court, in this case, stated that not every pre-nuptial agreement that regulates and restricts marital relations between spouses is void and against public policy. Although the law does not forbid them to regulate their married lives and incidents of marriage, such agreements must not seek to allow them to negate or resile from the marriage. Even if the defendant refuses to undergo a lawful pre-condition to consummation previously agreed between the parties, a marriage may be dissolved on the ground of willful refusal to consummate.

The wife filed a petition for a declaration of nullity on the grounds of wilful refusal to consummate the marriage against the husband. The case was uncontested but the court found that the parties were trying to convert a case for divorce into one of annulment as the latter was speedier and carried no stigma. The Court emphasized that a petition for annulment or divorce was not merely a matter between the spouses and the interests of the State should also be given importance. Proper evidence was not provided to back up the claims of wilful refusal to consummate and the Court refused to act as a “rubber stamp”, even in an uncontested case, and dismissed the petition.

The petition was filed on the ground of wilful refusal to consummate by the husband, even after several advances made by the wife. The husband made up excuses every time mainly stating his business. The Court stated that a spouse has a statutory duty to “co-operate” with each other including working together, collaborating, uniting, contributing, lending assistance, or acting in concert. The Court also stated that medical examination was not mandatory for a petition on the grounds of wilful refusal to consummate as against impotency or incapacity. Satisfying all the requirements under the law, the petitioner was granted the decree of nullity.

In this case, the wife and the husband after getting married purchased a flat in their joint name. Later, the wife filed a petition for annulment on the grounds of wilful refusal to consummate based on merely one instance right after the marriage. The Court stated that such wilful refusal should at least continue up to the date of the petition and not merely one refusal after marriage. The Court concluded that it was a “limited purpose” marriage, the purpose being the purchase of the flat, and also had no evidence to back up the claims made by the petitioner. The petition by the wife was dismissed.

The wife filed a petition for annulment on the grounds of wilful refusal to consummate against the husband, who was a part of a religious Hindu group. According to the wife, after the registration of the marriage, a temple ceremony took place where the husband laid out some conditions to the wife for her to live with him. The wife accepted the conditions but after three months of living together, she moved out due to the intolerable behavior of the husband. The Court, after going through the evidence, concluded that the wife, at the time of the marriage, did act in a way that made the husband believe that she would not pursue annulment even though she could have avoided the marriage from the beginning. The petition was dismissed.