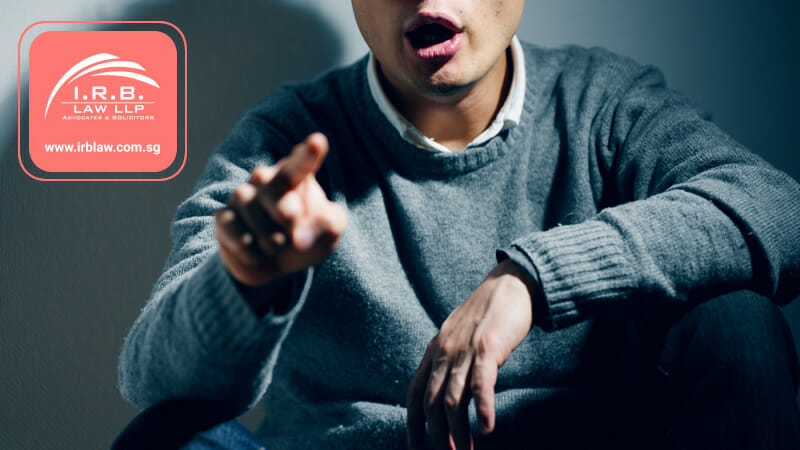 When a person writes or says something that causes injury to someone else, the court may deem such statements defamatory, especially if they have been read or heard by a large number of right-thinking individuals. Causing such injury or defamation may be described as influencing someone’s integrity or reputation to be tarnished, causing someone to be shunned or avoided, or simply exposing someone to mockery, contempt, or hostility. Defamation can be brought against a person whether their remarks were explicit or indirect, or whether they just repeated what someone else said.

Section 499 of the Penal Code makes defamation a criminal offence. This means that if there is enough evidence of a defamation offence, the police can take initiative and apprehend the perpetrator. Criminal defamation requires proof that the defamer planned, knew, or had cause to know that his remarks would hurt the victim’s reputation.
Written statements can constitute libel under the tort of defamation, while spoken comments can constitute slander, both of which can provide the victim with the ability to file a civil case against the offender and seek either compensation or an injunction. A tort is a breach of a civil duty owed to another person, as opposed to a crime, which is a breach of duty owed to society as a whole.

A successful defamation case might result in monetary damages and/or an injunction against the person who made the defamatory representation.

If a defamation lawsuit is successful, the court will award monetary damages to the offended party/plaintiff. Such a remedy tries to repair the plaintiff’s damaged reputation and alleviate the plaintiff’s anguish. When determining the amount for damages, the court considers the following factors:

Injunctions can be of two types:

Prohibitory injunctions are awarded to prevent future defamatory remarks from being published, whereas interlocutory injunctions require the creator of the statement to withdraw it.

When a false statement about a person is published, he may seek a protection order from the District Court under section 15 of the Protection from Harassment Act, which can prohibit the offending statement from being published again.

A person can sue another for defamation if the following three elements are satisfied.

1) The statement in question must be defamatory

If a statement damages the victim’s reputation among right-thinking members of society, causes the victim to be shunned or avoided or exposes the victim to hatred, contempt, or ridicule, such statement is defamatory. Furthermore, a remark is defamatory if the inferential meaning alone, rather than the actual meaning, defame someone. However, a typical counter-argument concerning whether or not a comment was defamatory is that it was said in jest rather than to offend someone. In general, remarks on websites that are light-hearted and full of slang terms in young, non-literal language might be read in metaphorical or loose meaning. However, this does not rule out the possibility of defamatory statements being made on the internet. As a result, whether or not a comment is defamatory is determined by the facts and circumstances of each incident. To determine whether the comment was defamatory, the court will examine the gravity or triviality of the situation.

2) The statement in question must refer to the victim

If the defamatory statement contains the name or photograph of the victim, a reference can easily be made. The question is whether the victim can be recognised from the statement’s words or photographs. This implies that if a blog post accuses an organisation of wrongdoing and a reasonable person may connect the imputation of dishonesty to a person who is a member of that organisation, a reference can be established. If no name or photograph is available, the court will consider if an indirect statement was made that implies the victim is the perpetrator. The offender’s careless language or lack of research is not a legitimate defence against defamation.

3) The statement in question must be published, or communicated to a third party

Six defences are available against a defamation charge.

To defend justification, the creator of the statement must demonstrate that it was true in both content and fact, which means that the statement and the facts upon which it was founded must be proven.

This defence will fail if the defendant was motivated by malice, intention to harm, intent to generate hatred or controversy, and so forth.

Absolute Privilege is granted in the following situations:

The defence of Qualified Privilege can be utilised:

The intermediary was unaware that the publication was defamatory. Normally, middlemen such as retail dealers, libraries, and delivery agencies have accessibility to this defence.

The defendant demonstrates that the comment was innocently made, delivers a public apology, and notifies recipients of the publication of defamatory information. The defendant is required to complete three duties:

The plaintiff has clearly and unequivocally consented to the publication of the defamatory statement. Consent must be freely and voluntarily granted. The defendant is not required to demonstrate that the plaintiff agreed to the specific defamatory remarks. The publishing, however, should come within the extent of the plaintiff’s consent.

The Course of Action for Victims

If you suspect that you have been the victim of defamation, the first thing you should do is file a police report, assuming you have enough proof that the person who made the remark intended, knew, or had reason to believe that the comment would hurt your reputation. Afterwards, you have the option of filing a civil defamation case or filing an application under the Protection from Harassment Act. You may also choose mediation, arbitration, or a private settlement outside of court, depending on the circumstances. If you have been the victim of defamation, you should seek legal advice immediately.

1) Libel: Libel is a method of defamation expressed by print, writing, pictures, signs, effigies, or any communication embodied in physical form that is injurious to a person’s reputation, exposes a person to public hatred, contempt or ridicule, or injures a person in his/her business or profession.
2) Slander: A false statement, usually made orally, which defames another person.
3) Injunction: An injunction is a court-ordered remedy awarded to a claimant to restrain a defendant from doing an act. Injunctions are usually awarded where damages (or monetary recompense) would be inadequate to compensate the claimant.
4) Remedy: A remedy is a form of court enforcement of a legal right resulting from a successful civil lawsuit.
5) Malice: Malice is a legal term referring to a party’s intention to do injury to another party. Malice is either expressed or implied.
6) Demonstrate: Demonstrate means meets the burdens of going forward with the evidence and of persuasion under the standard of clear and convincing evidence.

The plaintiff filed a defamation suit against the defendants after they published certain words in two documents on an internet platform. The records related to four transactions that occurred while the plaintiff was a director of the defendant’s corporation. The court trial focused solely on the defendants’ responsibility concerning the disputed language. The problems were:

a) The meanings of the contested terminology;
b) The justification defence;
c) The qualified privilege defence; and
d) The consent or leave and licence defence.

After going through each of the above-mentioned issues of the case, the Court dismissed the plaintiff’s claims against the defendants on the grounds of justification and qualified privilege.

This lawsuit, which was brought before the court on appeal, stemmed from remarks made during a business acquisition. The battle was for NatSteel Ltd’s control. The competing bids were from Sanion Pte Ltd and 98 Holdings Pte Ltd (the second respondent). Mr Oei Hong Leong, a wealthy businessman, used Sanion as his vehicle for exercise. In this case, he was the appellant. Mr Ong Beng Seng, another notable businessman, was linked to 98 Holdings. Mr Ban Song Long David, the first respondent, was a director of 98 Holdings and the origin of the assertions that led to the case. The remarks were repeated in an article authored by Ms Catherine Ong, the fourth respondent, and published by Singapore Press Holdings Ltd, the third respondent, in The Business Times on June 4, 2003. On the defences of justification, qualified privilege and fair comment, and vicarious liability, the judge ruled in favour of the respondents. An appeal against this decision was filed in the court. The court, after hearing all the arguments, dismissed the appeal as the appellant could not support his claims with proper evidence. The court uphold the previous decision that was given by the judge.