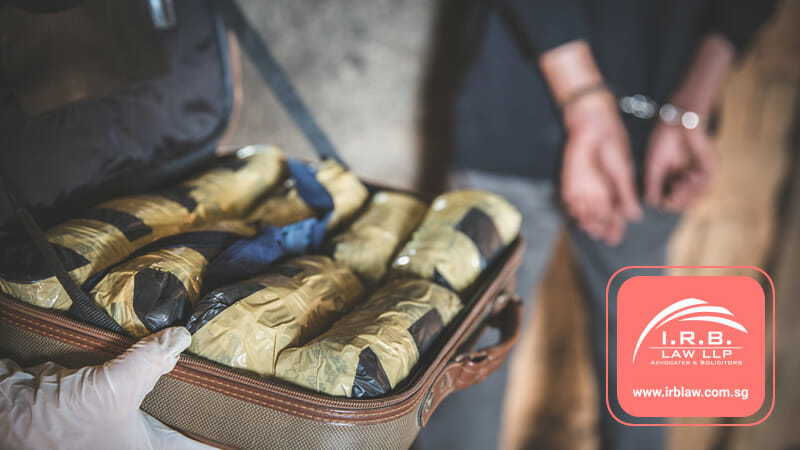 Singapore has the world’s strictest drug regulations by far. The country’s diligent enforcement of the Misuse of Drugs Act has made it unlawful to even possess a modest amount of illicit narcotic drugs. If a person is discovered in possession of a substantial number of narcotics, the government pushes for their punishment. Singapore’s zero-tolerance policy for illicit narcotics and narcotic substances is well-known by now. Singapore has a harsh penalty system in place, which has helped the country retain a tight grip on illegal drug possession and usage.

The Misuse of Drugs Act

Both the drug trafficker (seller) and the drug consumer are subject to the Misuse of Drugs Act (MDA). Manufacturing, trafficking, importing or exporting, possessing, or using controlled substances are all prohibited under the law. If a Singapore citizen or permanent resident is proven to have used controlled substances outside of Singapore (through a urine test), he or she will be presumed to have done so in Singapore and will be charged under the Misuse of Drugs Act. He or she will be punished according to the MDA’s provisions. Singapore’s drug law is contained in the MDA. There are three basic categories of drug offences under the MDA:

Possession of controlled substances is illegal under section 8(a) of the MDA. The legislation establishes several presumptions to aid drug enforcement in the investigation, search, and arrest of violators under the MDA. Any person in possession of anything containing a controlled substance is believed to be in possession of the drug until the individual can establish otherwise, such as that he or she was ignorant that the drugs were in his or her possession. To enter any premises for a narcotics raid, the police are not required to produce a search warrant. For example, if the police discover a pack of special K at a person’s apartment that a friend left behind after a party, such person is considered to have had the drug and to have known it was an illegal substance until that person can prove otherwise under section 18 of the MDA.

and is convicted again for consuming a specified drug or failing to provide a urine specimen.

Furthermore, if a controlled substance is discovered in a person’s urine, he is believed to have used the drug unlawfully under section 8(b) of the MDA, according to section 22 of the MDA. Unless he can demonstrate that the drug use was involuntary, which can be a tremendous burden to overcome.

Drug trafficking is punishable under section 5 of the MDA. A person would be violating the law if they were selling, transporting, delivering, distributing, or even proposing to do any of these things. One can, however, be prosecuted if they instruct someone else to convey a controlled drug. This includes trafficking narcotics on behalf of someone else, whether or not that person is in Singapore. It’s worth noting that while trafficking drugs and importing /exporting drugs are not the same thing under the MDA, they are both criminal offences.

The punishment for possessing a small number of illegal drugs, according to the requirements specified by the Misuse of Drugs Act, varies from $20,000 to 10 years in prison. A list of controlled narcotic substances that should not be brought into the nation is maintained by the Central Narcotic Bureau.

Consumption of controlled or specified substances carries a maximum sentence of 10 years in prison, a fine of $20,000, or both. This is the same as the maximum sentence for possession. If convicted of consuming a controlled substance or failing to produce a urine specimen a second time, one will be sentenced to at least 5 to 7 years in jail and 3 to 6 strokes of the cane.

Penalties range from imprisonment and cane strokes to the mandatory death penalty, depending on the type and quantity of substances trafficked. For drug-related offences, however, there is no death penalty if:

Under sections 31 and 31A of the MDA, the police have the authority to subject anyone to a urine and/or hair test if they have grounds to suspect that such person has consumed drugs. Failure to produce a urine sample for a urine test can result in a maximum of 10 years in prison, a $20,000 fine, or both. Failure to give hair samples for a hair test, on the other hand, is punished by up to 2 years in prison, a $5,000 fine, or both. Even if a person passes a urine test, possessing apparatus for consuming controlled substances, such as pipes, syringes, and other utensils can result in a maximum 3-year prison sentence, a $10,000 fine, or both.

1) Narcotics: A term that refers to a category of perception-altering or sensory-dulling drugs that have been created either through synthesis or extraction from substances of vegetable origin.
2) Illicit: An illicit activity or substance is not allowed by law or the social customs of a country.
3) Presumption: A legal inference that must be made in light of certain facts. Most presumptions are rebuttable, meaning that they are rejected if proven to be false or at least thrown into sufficient doubt by the evidence.
4) Possession: Possession means the ownership, control, or occupancy of any object, asset, or property, by a person.
5) Trafficking: The meaning of trafficking is the act of buying or selling usually illegal goods.
6) Consumption: Consumption means ingesting or having any measurable amount of a controlled substance in a person’s body.
7) Maximum Sentence: A maximum sentence represents the outer limit of a punishment, beyond which a convicted person may not be held in custody.

The accused requested a trial on two counts of diamorphine trafficking under sections 5(1)(a) and 5(2) of the Misuse of Drugs Act. The accused was driving a car down the slip road when he was stopped by police from the Central Narcotics Bureau, according to the evidence. He was quickly apprehended. Officers from the CNB transported him and his car to a neighbouring parking lot. They searched the vehicle there. In the carrying bag, CNB officers discovered a parcel wrapped in newspaper. Granular chemicals were discovered in the package. The chemicals were forwarded to the Health Sciences Authority for testing, and the HSA determined that they contained 26.13 grammes of diamorphine. This became the subject of the first charge. Along with more quantities of drugs at his house, the CNB officers also found drug-related utensils and equipment. The accused admitted that he had diamorphine in his flat and automobile. Officers from the CNB also discovered drug trafficking paraphernalia, indicating that he was repackaging and selling the diamorphine he had been given. The circumstances and the amount of diamorphine in the accused’s possession further suggested that the diamorphine was not meant for personal use. The prosecution had proven its case beyond a reasonable doubt on both charges, and the accused was in possession of diamorphine for the purpose of trafficking, according to the court. As a result, the accused was found guilty of drug trafficking.

The appellant was apprehended while in possession of a pipe (which was later proven to be tainted with methamphetamine by scientific investigation), 18 packets of crystalline white material, and many empty packets. Three urine samples were gathered from the appellant after he was transported to the Bedok Police Headquarters. In a BPHQ Instant Urine Test, the first sample tested positive for methamphetamine. The Health Sciences Authority received the second and third samples for examination. The presence of methamphetamine was discovered in the two samples, and certifications were given under section 16 of the MDA to that effect. The court convicted the appellant under section 8(b)(ii) of the Misuse of Drugs Act. He challenged this decision and filed for an appeal. The major question in this appeal was whether the HSA’s urine-testing methods at the relevant period complied with section 31(4)(b). The second point of contention, in this case, was the link between sections 16, 22, and 31(4)(b), specifically whether failure to comply with section 31(4)(b) would ipso facto result in the refutation of the section 16 assumption. The final question was whether, in theory, confessions were sufficient to demonstrate the actus reus of the offence under section 8(b) of the MDA beyond a reasonable doubt, in addition to relying on the statutory presumptions in the MDA. The court after hearing the arguments of the appellant and going through the evidence dismissed the appeal.

On March 30, 2018, the accused was hired by Syafie to bring methamphetamine into Singapore for Syafie’s “boss” from Johor Bahru, Malaysia. For $700, the accused promised to do so. He saw Syafie again the next day to finalise the preparations in person. Following their encounter, the accused sent a message to Syafie requesting that the Drugs be split into two bundles so that the accused could keep them in the seat compartment of his motorcycle on the way back to Singapore. The accused was caught by the authorities while crossing borders. Syafie was apprehended by CNB officers two weeks later, on April 16, 2018. Syafie admitted to aiding the importation of not less than 192.99 grammes of methamphetamine in an amended accusation. Another court sentenced him to 22 years in jail and 15 strokes of cane. The accused then pled guilty to the current allegation of importation on March 11, 2022. This accusation involved at least 249.99g of methamphetamine, which was a bigger amount than the one to which Syafie pled guilty. The accused was sentenced to 15 cane strokes and 25 years in prison by the court.

Officers from the Central Narcotics Bureau apprehended a car driven by Shaffy on the East Coast Parkway Exit 10B slip road to Bedok South Road on June 21, 2018. Shaffy and his girlfriend were detained by the authorities. Shaffy was interrogated by a sergeant who asked him a series of questions. He specifically questioned Shaffy whether he had anything to surrender, to which he answered that he had two packets containing powdered narcotics in his bag in the car. Shaffy was charged with possessing diamorphine for the purpose of trafficking, a violation of the Misuse of Drugs Act’s section 5(1)(a) read with section 5(2). Shaffy stated that he had gathered bundles containing ecstasy pills and intended to return them to his source once he discovered that they included diamorphine. The court dismissed his argument, concluding that the prosecution had shown Shaffy’s guilt beyond a reasonable doubt. As a result, the court found Shaffy guilty of the offence. The Judge imposed on Shaffy the mandatory death sentence since the prosecution had not issued a certificate of substantial assistance in his case and the court had determined that he was not a courier within the meaning of section 33B(2)(a) of the MDA.

A team of policemen from the Central Narcotics Bureau came to the car park of a building in Marsiling, Singapore, on November 20, 2018, to keep an eye out for the accused. Some of the policemen went to a Block unit at 8.25 p.m. The Unit’s main door was open. Because the accused’s bedroom was locked, force was employed to gain entry. The culprit was later apprehended inside his bedroom by the officers. On November 20, 2018, the accused, a 31-year-old male Singaporean, was arrested at his residence. At the time of his arrest, several packages of drugs were discovered in his bedroom. The accused was charged with an offence under section 5(1)(a) and section 5(2) of the Misuse of Drugs Act on November 21, 2018. This case concerned whether the accused should be convicted of the Charge. The court was satisfied that the Charge against the accused had been made out after hearing the parties. The accused was found guilty of the offence mentioned in the Charge by the court and was therefore convicted.