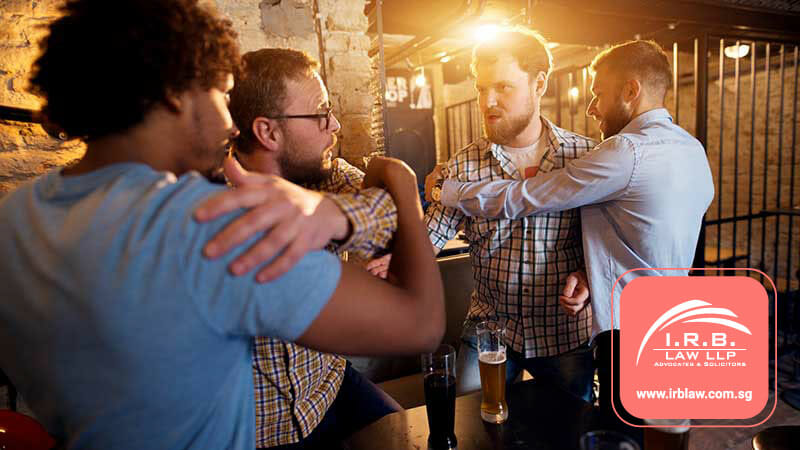 In the most recent spade of public order offences this year, a 34-year-old man was arrested after he brandished at least two knives at a coffee shop in July 2017, hit a 66-year-old man over the head with a plastic chair and refusing to submit particulars to the police. The following month, two men were arrested in August 2017 for a brawl at a popular pork rib soup stall in Balestier. IRB Law LLP provides an explanatory on the consequences and effects of such acts of public nuisance.

What Constitutes A Public Nuisance Act?

A public nuisance act is committed when a person causes common injury, danger or annoyance to the public or people in the vicinity.

This offence is defined under section 268 and punishable under section 290 of the Penal Code with a maximum fine of S$1,000. It is also important to note that this offence may be committed when a person gathers a crowd and causes annoyance in the neighbourhood or obstruction to the traffic in a public place.

In the case of the two men, aged 50 and 53, who caused a scene at Balestier Bak Kut Teh (Kian Lian) at 365 Balestier Road in the early hours of an August morning,  such an offence of affray is committed where two or more persons disturb the public peace by fighting in a public place.

This offence is defined under section 267A of the Penal Code and is punishable by a maximum sentence of one year of imprisonment, a fine of up to S$5,000, or both.

As the offence targets the disturbance of public peace, there does not need to be direct, tangible harm such as injury before an act of affray is found to be committed.

This offence aims to prevent the disturbance of the public peace and to preserve the quality of life and security of people in the neighborhood.

Previous Cases of Fighting in Singapore

In Public Prosecutor v Peh Hua Kang SGDC 105, two men were involved in a fight with a baseball bat. The accused was not given a custodial sentence as he did not cause any significant injuries to the other party involved.

Instead, he was given a fine of S$4,000 with a default sentence of four weeks’ imprisonment. The court also highlighted that each person involved in an affray case would normally have to bear some responsibility given that it takes at least two people to have a fight. Therefore, the best thing to do is to walk away from an argument before it escalates into a fight.

Disorderly Behavior In Public; Such As Being Naked

While it is legal to be naked in your own home this privilege comes with a requirement. Under Section 27A of the Miscellaneous Offences (Public Order and Nuisance) Act, Chapter 184, a person cannot be naked in a private place while being exposed to public view. This law came into effect on Feb 27, 1996. If you are found guilty of this offence, you risk having to pay a fine not exceeding $2,000 or being sentenced to prison for a term not exceeding three months – or both.

Furthermore, if you are committing this offence, a police officer has the right to enter your home without your authorization and use force, if necessary, to arrest you.

Previous Cases of Disorderly Behavior: Being Naked at Home

In August 2009, taxi driver Chua Hock Hin was fined S$2,600 for being naked in his own flat in clear view of his neighbours.

A public servant serves the public’s interest and is protected by the law in the discharge of their responsibilities. Any acts committed to preventing them from discharging their duties is punishable under criminal laws.

It is important to note that verbal and physical acts against public servants will not go unpunished. This was reiterated by the Minister of Law and Home Affairs K. Shanmugam in December 2016 who had asked for a review of the law on assault of public officers.

Some of the offences against public servants include:

(a) Threatening, abusing or insulting a public servant or public service worker: section 6 of the Protection from Harassment Act

A person who speaks, behaves or communicates in any indecent, threatening, abusive or insulting manner towards a public servant or public service worker when he or she is executing his duty is guilty of an offence, punishable with a maximum sentence of 12 months’ imprisonment, a fine not exceeding $5,000, or both.

In Public Prosecutor v Harvinder Singh s/o Pritam Singh SGMC 11, the accused was found guilty of this offence when he behaved in an agitated and disorderly manner and shouted vulgarities at a police officer on the way to the police station after being placed under arrest. He even challenged the police officer to a fight. In light of his lack of genuine remorse and previous convictions for misconduct in public, he was sentenced to one month’s imprisonment.

The Court emphasised that such conduct towards police officers should not be tolerated, or it would translate to undermining police dignity and authority.

(b) Using Criminal Force to Deter a Public Servant from the Discharge of their Duty:

This offence is punishable by a maximum sentence of four years’ imprisonment, or with fine, or with both.

In Emmanuel s/o Munisamy v Public Prosecutor SGDC 72, a sentence of three months’ imprisonment was meted out to the accused who, while being handcuffed by a police officer for using abusive language on a public servant, broke free, hit the police officer’s neck and grabbed his head with both hands, causing the police officer to sustain several injuries.

Section 332 of the Penal Code states that a person who voluntarily causes hurt to a public servant in the discharge of his or her duty or with the intention of preventing or deterring a public servant from discharging his or her duty is guilty of an offence. This offence is punishable by a maximum sentence of seven years’ imprisonment, or with a combination of imprisonment, fine, and/or caning.

In Public Prosecutor v Letchumanan s/o Manikam SGDC 27, the accused was found guilty of this offence (amongst several other offences of causing grievous hurt, theft, using threatening words towards a public servant, and disorderly behaviour). Upon his arrest, he was escorted to a hospital by a police officer. Along the way, the accused yelled and shouted, refused to calm down, and threatened the police officer by saying that he would kill him and his family. He also kicked the police officer’s inner thigh when the police officer tried to restrain him from committing further disturbance.

Being Drunk In Public

Under section 14 of the Liquor Control (Supply and Consumption) Act, a person who is drunk (i.e. when it is reasonable to believe that his or her speech, balance, co‑ordination or behaviour is noticeably affected as a result of consumption of liquor) and incapable of taking care of himself or herself in a public place is guilty of committing an offence.