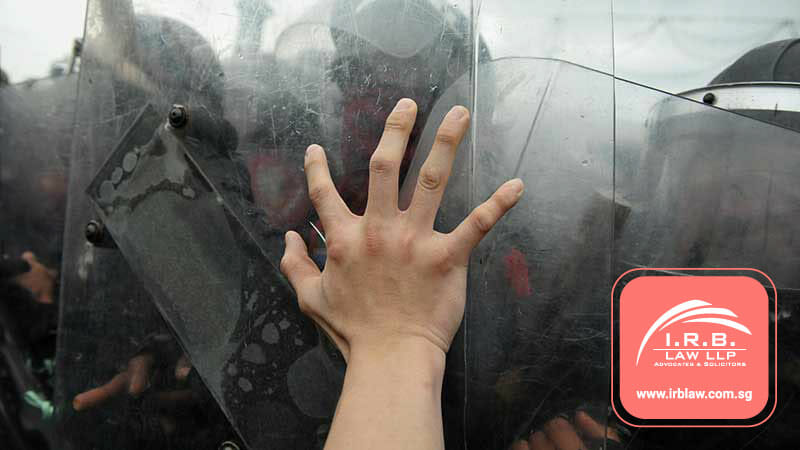 The Little India riot which took place on 8 December 2013 is the most recent large-scale riot to happen in Singapore in over 40 years. The violence, destruction and criminality began after an accident which killed Indian national, Sakthivel Kumaravelu and which resulted in 62 injuries and 40 arrests.

Contrary to popular belief, rioting does not need to involve large groups of people. In March 2017, three 18-year-old men were arrested for their suspected involvement in a case of rioting near Petir Road.

This article will thus focus on rioting as an aggravated form of unlawful assembly, whereby 5 or more people gather in furtherance of an illegal purpose, intentionally or recklessly causing disturbance to public peace through the use or threat of use of violence and terror.

What is unlawful assembly?

Under Chapter VIII, section 141 of the Penal Code, an unlawful assembly is defined as an assembly of more than 5 persons who have the “common object” of:

The maximum penalty for being part of an unlawful assembly is two years’ jail and a fine. This is seen in section 143 of the Penal Code.

On 27 December 2016, Ng Bing Hui pleaded guilty to being part of an unlawful assembly and was jailed for 10 weeks. Mr Ng, along with Mr Ho Hock Hui and Mr Kee Hong Yong, had a common purpose under (a) to incite and encourage acts of aggression against the police officers by the rest of the crowd, threatening and intimidating the lives and safety of the officers, even forcing one of them to pull out his gun.

What is joining an unlawful assembly, armed with a deadly weapon?

Under Chapter VIII, section 144 of the Penal Code, anyone who is guilty of being part of an unlawful assembly, armed with a deadly weapon or an object which can be used as a weapon of offence, which is likely to cause death, shall be liable to imprisonment extending up to 5 years, or fine, or caning, or a combination of any of these punishments.

Under Chapter VIII, section 146 of the Penal Code, whenever force or violence is used by an unlawful assembly or by any member thereof, to achieve the common object of the assembly, every member of such assembly is guilty of the offence of rioting.

Rioting is punishable under section 147 of the Penal Code, with imprisonment of up to 7 years and possibly caning.

On 13 October 2017, seven Myanmar nationals were sentenced to a year in prison for rioting after getting involved in a drunken fight with three other Myanmar nationals over cigarettes. District Judge Imran Abdul Hamid hoped that the harsh sentencing would serve as a deterrent to prevent Peninsula Plaza from turning into Little India.

What is rioting, armed with a deadly weapon?

Under Chapter VIII, section 148 of the Penal Code, anyone who is guilty of rioting, being armed with a deadly weapon or an object which can be used as a weapon of offence, which is likely to cause death, shall be liable to imprisonment extending up to 10 years as well as caning.

On 24 April 2017, Mr Lye Wing Wai was charged with rioting with a deadly weapon at Clarke Quay multi-storey carpark which caused the death of Mr Jeffrey Tan. He was the seventh man to be charged in connection with the incident.

Singapore takes rioting very seriously because it can cause significant injury, death and harm to the state security. Such offences also carry large penalties which include imprisonment, fines and caning. If you have been charged with unlawful assembly or the related offence of rioting, you will need a lawyer to help assist with your defence.

At I.R.B Law LLP, we have competent legal professionals with an in-depth knowledge of the law and the criminal justice system. They will be able to assist you with your queries and help put forward a sound defence for your case.

Please do not hesitate to contact us at [email protected] or call us at 6589 8913 so that we can advise you on your matter.