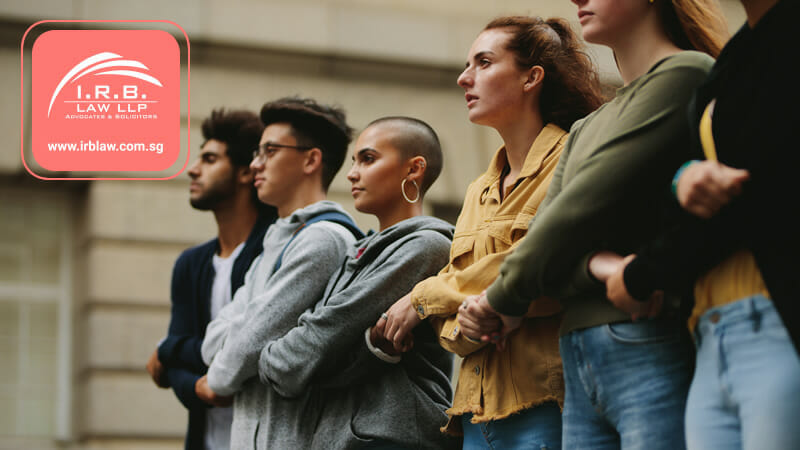 In Singapore law, Chapter 8 of the Penal Code governs unlawful assembly. The definition of an unlawful assembly is “an assembly of five or more persons.” A gathering that was not unlawful when it first came together can later become one. Many people mistakenly believe that riots and unlawful assembly usually require big crowds of people, however, this isn’t always the case. This article will discuss the definitions of unlawful assembly, rioting, and similar offences, as well as the associated punishments.

Section 141 of the Penal Code defines an unlawful assembly as a gathering of five or more people for any of the following common purposes.

1) Joining an Unlawful Assembly Armed with any Deadly Weapon

A member of an unlawful assembly who is equipped with any object or weapon that, if “used as a weapon of offence, is likely to cause death,” is subject to more severe penalties, including a fine, a caning, a jail term of up to five years, or a combination of any of these penalties as mentioned under section 144 of the Penal Code.

2) Joining or Continuing in an Unlawful Assembly, knowing that it has been Commanded to Disperse

Anyone who joins or remains in an unlawful assembly while being aware that they have been ordered to disperse in accordance with regulatory requirements will be penalised with up to 5 years in prison, a fine, or a combination of the two as according to section 145 of the Penal Code.

Rioting is a more severe type of unlawful assembly since it requires the use of force or violence. When an unlawful assembly or any of its members use force or violence, rioting is committed, according to section 146 of the Penal Code. Then the entire assembly will be deemed guilty of rioting. Anyone found guilty of rioting faces a maximum of 7 years in prison, as well as being subject to caning.

4) Rioting, Armed with a Deadly Weapon

Anyone found guilty of rioting, possessing a deadly weapon or an object that may be used as a weapon of offence and is likely to cause death is subject to caning as well as a jail sentence of up to 10 years, according to Chapter 8, section 148 of the Penal Code.

According to section 151, anyone who intentionally participates in an assembly of 5 or more people that is likely to disrupt the peace of the community after being lawfully ordered to disperse faces up to two years in jail, a fine, or a combination of the two. The perpetrator shall be punished under section 145 if the gathering qualifies as an unlawful assembly under section 141.

Anyone who assaults or threatens to assault, or obstructs or attempts to obstruct a public servant in the discharge of his duty in endeavouring to disperse an unlawful assembly or to suppress a riot or an affray, or uses, or threatens or attempts to use, criminal force to such public servant, will be punished with imprisonment for a term which may extend to 8 years, or with fine, or with both as according to section 152 of the Penal Code.

7) Intentionally or Rashly Giving Provocation, with Intent to Cause Riot

If by doing something illegal, a person intentionally or rashly gives provocation to another with intention or knowledge that such provocation will cause rioting to be committed by such other person shall be guilty of this offence as according to section 153 of the Penal Code.

If someone knows that anyone has been hired, engaged, or about to be hired, engaged, or employed to join or become a member of an unlawful assembly and harbours, receives, or assembles them in a home or other location under his occupation, charge, or control with the intent to allow or facilitate their joining or becoming a member of an unlawful assembly, or to shield them or any of them from punishment, they will be guilty of committing this offence. The punishment for committing this offence is imprisonment for a maximum of 2 years, a fine or a combination of both.

Anyone who does one of the actions listed in section 141, or assists in performing one of them, by being hired, offered, or by seeking to be hired, will be subject to a period of imprisonment that may not exceed two years, a fine, or both.

Anyone who, while so employed or hired as described above, goes armed, engages in or offers to go armed with any deadly weapon or anything else that, when used as a weapon of offence, is likely to cause death, will be punished with up to 5 years in prison, a fine, or both. These two offences are mentioned under section 158 of the Penal Code.

If someone commits violence in public, even if there are less than five individuals involved, they may be charged with affray. An affray is committed when two or more people fight in a public area, causing a disturbance of the peace, according to Penal Code section 267A. If a person is found guilty of affray, they may face up to a year in prison and/or a $5,000 fine.

The courts’ main approach has been that if convicted of rioting, rioters would be held accountable for the activities of their fellow rioters and jailed as a group. Rioting is a collective offence since rioters share the same purpose of an unlawful assembly and do not perform their acts in isolation. When deciding on a sentence, the judge may take into account the following considerations, which may either raise or decrease the sentence:

1) Criminal Force: A person is said to use criminal force against another person when they intentionally use force against another, without the other person’s consent to either commit any offence, intend to cause injury, fear, or annoyance to the other person, or knows that such force would likely cause injury, fear, or annoyance to the other person.
2) Assault: Unlike criminal force, actual force does not need to be used to commit an assault. A gesture or preparation, beyond words, by a person intending or knowing that such gesture or preparation would likely cause another person to apprehend that criminal force is about to be used on them, constitutes an assault.
3) Provocation: Provocation is when a person is considered to have committed a criminal act partly because of a preceding set of events that might cause a reasonable individual to lose self-control. This makes them less morally culpable than if the act was premeditated and done out of pure malice.
4) Reason to Believe: A person is said to have “reason to believe” a thing if he has sufficient cause to believe that thing, but not otherwise.
5) Intentionally: A person is said to do an act intentionally where that person does an act deliberately.
6) Perpetrator: A person who perpetrates, or commits, an illegal, criminal, or evil act.
7) Rash Act: A rash is a hasty act. Using ordinary English language, a “rash” act requires a person to be aware of a risk, and then commit a deliberate act or omission despite the awareness of that risk.
8) Sentencing Factor: Factors considered in determining sentences for a specific offence.

Lee Wei Yang, Sean, a 29-year-old male Singapore Citizen was charged with being a member of an unlawful assembly, together with 6 other people at the ground floor of Singapore Land Tower located at 50 Raffles Place, Singapore, whose common object was to cause hurt to one Tan Rong Sheng Royson and one Yeo Yuan Yuan, and in the prosecution of the said common object of the unlawful assembly, some of them had used violence, to wit, by punching and kicking the two victims, and thereby committed an offence punishable under section 147 of the Penal Code. The prosecution must bring a crucial witness whose testimony might contradict a claim, the judge stated in this case. The analysis is unaffected in any way by the witness being presented to the defence or by the defence’s ability to find the witness on their own. If the prosecution chooses not to call the witness under certain circumstances, it may simply be determined that it failed to meet its burden of proof. At the conclusion of the trial, the court found that the Prosecution had failed to prove their case against the accused beyond a reasonable doubt and the judge granted the Accused a discharge amounting to an acquittal.

The accused, a 27-year-old Singapore citizen had claimed trial together with his co-accused for voluntarily causing grievous hurt by a knife. As he was subject to a remission order by the Commissioner of Prisons and had committed the offence while the order was in force, he was also liable to be punished under section 50T(1)(a) of the Prisons Act with an enhanced sentence of imprisonment. Pursuant to an offer by the Prosecution, the accused pleaded guilty to five charges which included a charge under section 148 of the Penal Code and section 143 of the Penal Code. On 25 July 2018, along Serangoon Road, Singapore, together with 4 others, the accused was a member of an unlawful assembly, whose common object was to voluntarily cause hurt to the victim named Dhines with deadly weapons, and in the prosecution of said common object, one or more members of the unlawful assembly used violence against the victim and were armed with deadly weapons, namely a samurai sword, chopper and a baton. The judge sentenced the accused to undergo corrective training for eight years because the court thought that it was necessary for his rehabilitation and the purpose of preventing future crimes. Additionally, the judge felt that enhanced sentences should be imposed for each of the charges that were brought against him because three of them called for the application of caning. The total sentence imposed was enhanced punishment of 360 days’ imprisonment and eight years’ corrective training to run consecutively and 24 strokes of the cane.

The accused and several other people were travelling in a convoy of three automobiles at the Clarke Quay multi-storey parking lot on the morning of April 16, 2017. At level 2A of the parking garage, someone took a swing at one of the passing automobiles. One of the co-accused was prompted to exit from his automobile as a result and he punched the victim. The victim dropped to the ground and hit his head on the surface. He later died as a result of the head injuries. Two of the deceased’s friends who were walking ahead then walked towards him. As they did so, the accused came out of his car with a metal bar and used it to strike the first victim, causing him grievous hurt. As the second victim tried to intervene, he was also hit by the metal bar welded by the accused. Thereafter, the second victim was set upon by the accused and six other co-accused persons. The accused and the co-accused persons then left the scene before the arrival of the police. The accused pleaded guilty to a total of five charges. These included one charge for rioting under section 147 of the Penal Code and one charge for voluntarily causing grievous hurt with a weapon under section 326 of the Penal Code. The total sentence imposed was 29 months’ imprisonment, 6 strokes of the cane and a fine of $41,500, in default 83 days’ imprisonment. As the accused was unfit for caning, the court imposed additional two weeks imprisonment for each stroke of the cane. The accused filed this appeal because he was dissatisfied with the decision to impose an additional sentence of two weeks’ imprisonment for each of the six strokes of the cane from which he had been exempted and that the additional term of imprisonment, totalling 12 weeks, was to begin after the expiry of his current sentence. The judge concluded that the sentence imposed was not inappropriate and ordered the accused to serve the same.