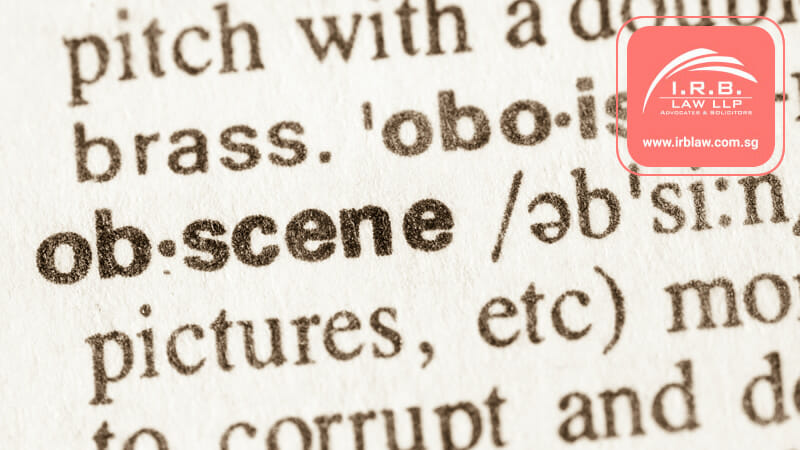 In Singapore, selling or circulating obscene materials is illegal. Such obscene materials can be of many types including books, drawings, films, etc. Exporting or importing such materials as well as knowing that such objects will be sold in the future is also punishable under Singapore Law. Such punishment is given under section 292 of the Penal Code 1871.

Section 42 of the Penal Code explains what is considered obscene under the law. It states that if a person after reading, seeing, or hearing any matter tends to become depraved or corrupt due to the effect of such matter or thing, then such matter or thing is said to be obscene. Thus, the effect of the thing or matter, which is considered to be obscene, must make a person corrupt or immoral after they read, see or hear such matter.

The Offense of Sale of Obscene Books, etc.

The offense of sale of obscene books, etc. is given under section 292 of the Penal Code and contains several subsections for the explanation of the offense as well as providing the definition and punishment for such offense. Under section 292, things that can be categorized as obscene are:

A person, in relation to the above-mentioned things, is said to have committed the offense under section 292(1)(a) of the Penal Code, if such person:

Thus, the offense is committed even if the actual object is not sold or distributed but kept in the possession of the offender for that purpose. Subsection 1(a) of section 292 provides this explanation.

Import and Export under Section 292

Thus, under this subsection, a direct purpose is not needed to commit the offense. Even having knowledge or reason to believe that such objects will be sold, distributed, etc., is sufficient to commit an offense under section 292(1)(b).

Being involved in any business concerning any obscene object is also considered an offense under section 292 of the Penal Code. It is specifically mentioned under section 292(1)(c). If a person:

In the course of the business such obscene objects must be:

Section 292(1)(e) mentions that even a mere attempt to do any of the acts mentioned in the above subsections will be categorized as an offense. An offer by any person to do any of the acts in the above-mentioned subsections also constitutes an offense with the same punishments. Thus, a person does not have to do an illegal act mentioned under section 292 to constitute an offense but a mere attempt or offer is enough to hold such a person liable under this section.

Punishment for Offense of Sale of Obscene Books, etc.

Computer Data as an Object

Section 292(2) of the Penal Code includes data stored in a computer disc or any other electronic means in the definition of “object”. Such data must be capable of conversion to writing, image, or any other form of representation. Thus, any of the offenses mentioned under subsection (1) of section 292 would also include computer data capable of conversion to any form of representation as well.

Some exceptions to the sale, distribution, letting to hire, exhibition, circulation, import, export, conveyance, or any other dealing of obscene objects are:

a) If it is authorized by or written under any law.
b) Used for religious purposes.
c) Used for the conveyance of religious idols.

1) Immorality: Immorality means conduct that is inconsistent with the standards of public conscience and good morals. It is conduct that brings the individual concerned or the education profession into public disgrace or disrespect and impairs the individual’s service in the community.
2) Exhibition: Exhibition means broadcast, transmission, distribution, communication to the public.
3) Possession: Possession means the ownership, control, or occupancy of any object, asset, or property, by a person.
4) Import: This means to bring goods into one country from another country and are regulated by customs law.
5) Transmission: Transmission is the act of transferring something from one spot to another, like a radio or TV broadcast.
6) Obscene: Offensive or disgusting by accepted standards of morality and decency.

In this case, the accused was sentenced to a total of 7 months of imprisonment being charged with 4 offenses under section 292(1)(a) of the Penal Code and a few sections under the Films Act. The background of this case was that the accused was at a makeshift stall that had displayed several VCDs, containing obscene films. The undeniable fact was that no transaction took place between the accused and the other people at the stall. The question revolved around whether the accused’s actions as observed by the witnesses indicated that he was manning the stall or whether he was merely browsing. After considering all the evidence, the court concluded that the prosecution proved the offenses of the accused beyond reasonable doubt and therefore the accused was convicted of the offenses.

The background of this case involved a young offender who uploaded pornographic images on his online blog, which were edited by himself. He was charged under section 292(1)(a) and section 298 of the Penal Code. He was sentenced to a total of 4 weeks imprisonment but the term was backdated. After release, he appealed against the conviction and sentence on both charges. The court after going through the agreed facts of the case submitted by both the prosecution and the defense, concluded that the imprisonment term given by the court was appropriate for the offense committed, and due to the young age of the offender, the sentence was even backdated, thus his appeal was not accepted by the court.