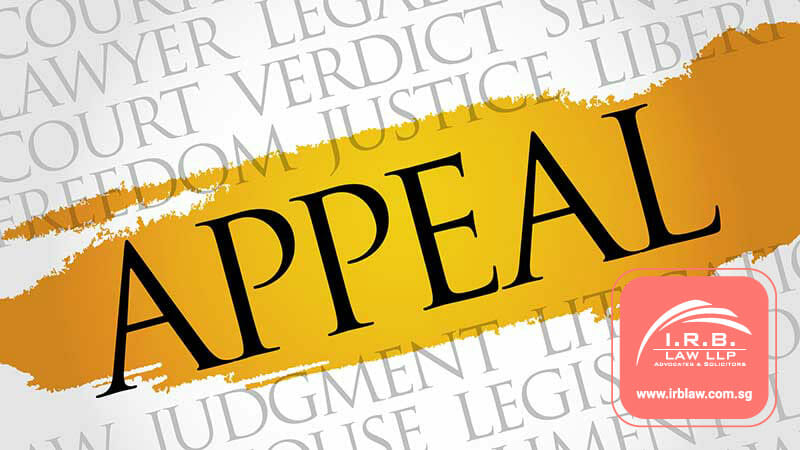 Facing criminal charges at trial in Singapore is never easy, but things will become much harder once you lose your case.

You may have felt that you were under pressure to plead guilty even though you were innocent. Alternatively, you may feel that the judge made a mistake, or your lawyer did not handle your defence properly.

Should you find yourself in such a situation, all is not lost yet. Your case has one last chance to succeed through an appeal. If your appeal is allowed, your sentence could be reduced or, in very specific circumstances, you may be acquitted entirely. On the other hand, if the prosecution appeals, you may find your sentence increased.

You only have a brief window of opportunity to prepare your appeal and make your last chance count. Deciding whether to appeal your case can be overwhelming. That is why we at I.R.B Law we have prepared this simple guide to explain everything that you need to know about the criminal appeals process.

What is an Appeal in Singapore?

An appeal is a legal process where a party seeks to have a court decision set aside, changed or reversed. To support an application for an appeal, you need to demonstrate to the court that your case has a basis for appeal. In the context of Singapore criminal law, you may appeal based on a question of fact and/or a question of law.

Should I appeal against the Court’s decision in my case?
No decision to appeal should be taken lightly. This is because the outcome of the appeal may not go in your favour as the court hearing the appeal – better known as the ‘appellate court’ – may confirm, reverse or change the decision of the trial court.

The appellate court has the power to overrule the trial court’s and impose a different sentence in its place. This means that it is possible, as a result of the appeal, to receive an even harsher sentence than that imposed by the trial court.

On the other hand, the appellate court is typically very reluctant to re-evaluate the facts of the case as these have usually been determined by the lower court. It is therefore also possible for the appeal to be summarily rejected without a hearing if it does not raise a question of law or sufficient material to raise a reasonable doubt as to whether the conviction or sentence was correct.

All of this means that an appeal must be handled skilfully because there is no guarantee that the Court will allow your appeal and a risk that the appeal may work against you.

This is why you need a criminal lawyer with expertise in appellate advocacy to prepare your appeal and give your case one last chance to succeed.

When can I appeal against my conviction?

If you have been convicted in a Court of Law in Singapore, you may appeal if you are not satisfied with your conviction.

However, if you pleaded guilty to your charge, you may only appeal against the sentence – for example, if you believe that the sentence is too long or is not legal – unless you obtain permission from the Court of Appeal. If you feel your decision to plead guilty was improperly arrived at, our justice system may reverse your decision to plead guilty in very rare circumstances.

How do I appeal against my conviction?

To appeal against your conviction, you must file a Notice of Appeal with the Court Registry within 14 days from the date of the judgement or sentence.

Since you only have a very narrow window of opportunity to file and prepare an appeal, it is highly recommended that you seek legal advice as soon as possible if you are not satisfied with the outcome of a criminal case. Extensions to the 14-day window are possible, but on valid grounds.

How many times can I appeal?

Under Singapore law, you may only appeal against the decision of the criminal trial court once.

Because the legal system depends on finality and stability, there can be no further appeals against the decision of the appellate court once it has heard the appeal.

However, after a criminal matter has been determined by the High Court has determined while acting in its capacity as an appellate court, one of the parties may apply for leave to refer any ‘question of law’ to the Court of Appeal. This question must be one of public interest and must have arisen during the case.

The Public Prosecutor may also refer any question of law of public interest to the Court of Appeal but does not require the Court’s leave to do so.

Which court will my appeal be heard in?

On the other hand, the High Court tries more serious offences with harsher punishments, including death or imprisonment for terms exceeding 10 years.

Which other parties can appeal?

Only a party to the case – either the accused person or the Prosecution – may appeal against the Court’s decision on that matter.

This means that the Public Prosecutor may appeal against the acquittal of an accused or against the sentence imposed by the Court.

However, a victim cannot apply for a review of the Court’s decision because he or she does not have the required ‘locus standi’ – in other words, the right to bring a legal action.

I am not satisfied with the lawyers who handled my case. Can I change to different lawyers for my appeal?

Yes. As a general rule, you may dismiss your lawyer and hire a new one in the same way that you would do with other professionals, such as a doctor or tradesman. You have the right to pay the lawyer of your choice to represent you in a legal matter. If the lawyer that you have engaged does not meet your needs or expectations, then you are free to dismiss him or her.