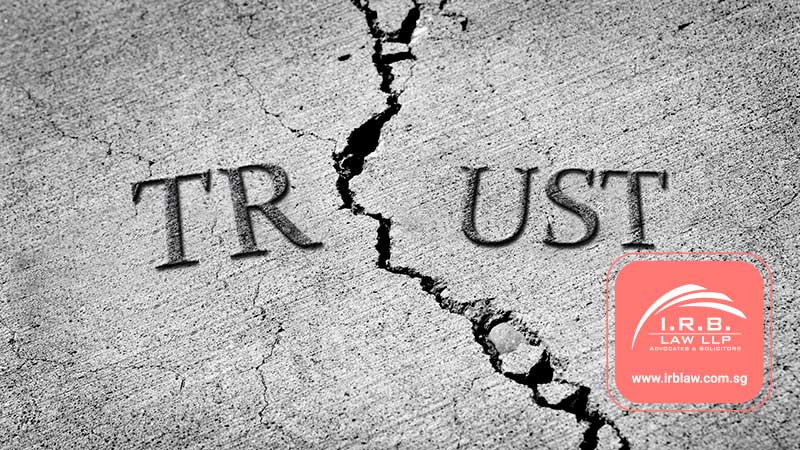 Explanation of Criminal Breach of Trust

Elements of Criminal Breach of Trust

Certain elements are required for an offense to be categorized as a criminal breach of trust. These elements are:

1) Entrustment: First, the individual must be given supervisory control or dominion over the property, finances, or other assets in question. When a professional obtains property, entrustment is easy to spot. It makes no difference what the genuine identity of the party who entrusted the property is for assessing whether the individual was “entrusted” with it. Even if the entrusting party’s identity is unknown or not what the individual thought it was, the person may be found to have been entrusted with the property.

2) Dishonesty: The individual must also have engaged dishonestly and with the deliberate objective of generating unlawful gain or damage to oneself or another person. This includes the purpose to allow someone to act dishonestly. Proof of intention is essential, and if the individual was just mistaken or negligent, it is inadequate.

4) Violation of Law or Contract: If a person’s job imposes a legal or contractual responsibility on that person, and that person violates that duty, that person may be held criminally accountable for a breach of trust. For example, the executor of a will has a legal obligation to distribute assets per the wishes of the deceased. Failure to act in line with the will may result in a criminal breach of trust. The same is true for a contractual obligation.

5) Allowing Another Person to Misuse Property: If a person is entrusted with property or funds and allows someone else to exploit it purposefully and dishonestly, that person is still responsible for criminal breach of trust, even if they did not misuse the property themselves. The other party, on the other hand, would be held accountable for aiding and abetting such a person in their crime.

1) Property entrusted for Transportation or Storage: If a person commits a criminal breach of trust in respect of such property that he was entrusted with for transportation for hire or storage for rent or charge, such person is liable to harsher punishments for the offense. This is mentioned under section 407 of the Penal Code.

2) Criminal Breach of Trust by Employees: If an employee who has been entrusted with property or dominion over any such property commits a criminal breach of trust in respect of that property, such offense will also fall under the aggravated form of criminal breach of trust. This is mentioned under section 408 of the Penal Code. Employees shall also include those people who are working with the same qualities as those of an employee. Employees or people working in the same capacity as an employee can also be held liable even if they are not getting paid for the employment.

3) By Public Servant, Banker, Merchant, Agent, Director, Officer, Partner, Key Executive, or Fiduciary: If any such person commits a criminal breach of trust in the capacity of their power and position, they will be liable for the harshest punishment out of all the aggravated forms of criminal breach of trust. Mentioned under section 409 of the Penal Code, a person may be a fiduciary even if the contract or agreement says otherwise.

Punishments for Criminal Breach of Trust

Some factors which are considered by the court for sentencing the accused are:

1) The period in which the offense was perpetrated.
2) The lack of restitution even when the offender had the means and opportunity to do so.
3) The offense committed violated the public interest.
4) The amount of money or the value of the property in question.
5) Mental illness of the offender.
6) Impact on the confidence of the public or the effect on the reputation of Singapore.
7) The offense is committed by an organized group.
8) Rank or status of the offender and the degree of trust reposed in them.

Some mitigating factors that might be considered by the court while sentencing the accused are:

Criminal Breach of Trust as an Arrestable Offense

A suspect can be arrested without a warrant if he or she has committed an arrestable offense. All forms of criminal breach of trust are arrestable offenses. It is up to the police or the court to determine whether or not to release a suspect on bail once they have been apprehended.

A person who is found guilty of criminal breach of trust will have a criminal record. The record, on the other hand, can be wiped clean. To be eligible for the record to be spent, one must meet the following requirements:

If a person meets these requirements, they must stay crime-free for at least 5 years, beginning with their release from jail or, if a fine was imposed, the day the sentence was passed.

1) Dishonestly: A person is said to do an act dishonestly if they do that act with the intention of causing wrongful gain to him/her or another person, or wrongful loss to another person, regardless of whether such gain or loss is temporary or permanent or that act done by him/her is dishonest by the ordinary standards of reasonable and honest persons and they know that that act is dishonest by such standards.
2) Misappropriation: Misappropriation refers to the act of pocketing property that does not belong to you.
3) Conversion: Conversion involves dealing or using someone else’s property as though it were your own.
4) Contractual Obligations: Contractual obligations are duties that each party is legally responsible to act upon in a contract agreement. With each contract, either of the parties exchanges something of value, whether it be a product, services, money, etc in connection with various obligations.
5) Abetting: Abetting means to encourage or incite another to commit a crime/offence.
6) Sentencing Factor: Factors considered in determining sentences for a specific offence.
7) Mitigating Factor: Any fact or circumstance that lessens the severity or culpability of a criminal act. Mitigating factors include an ability for the criminal to reform, mental retardation, an addiction to illegal substances or alcohol that contributed to the criminal behavior, and past good deeds, among many others.

Centaurus Enterprises (Singapore) Pte Ltd engaged the accused as an administrative assistant. He was the Company’s sole full-time employee, and there was no one to oversee his job. Aside from the defendants, the Company had a part-time accountant on staff. The accused was given electronic banking access to the company’s three UOB bank accounts to verify the accounts’ fund balances. The accused acknowledged that he took money out of the Malaysian account to help pay for his expenditures in Malaysia. The court sentenced the accused to a total of 6 years imprisonment.

The accused was entrusted with using the company’s cheques to make payments to other parties as part of his employment responsibilities. The only two authorized signatories on the company’s OCBC bank account were the complainant and the accused. Before a cheque from the bank account could be cashed, both of their signatures were necessary. Because the complainant traveled frequently for work, she would sign multiple blank cash cheques ahead of time and pass them over to the accused. From March to August 2019, the accused counter-signed empty cash cheques that had previously been pre-signed by the complainant, then put in an amount and encashed them at an OCBC bank branch without the complainant’s knowledge or agreement 23 times. In this way, the accused transferred a total of S$223,500 from the company’s bank account to his personal account. Full restitution was made by the accused after the discovery of the offenses. The court sentenced him to a total of 2 years imprisonment.

Accused conspired with another to commit a criminal breach of trust by a servant concerning plotting with the staff to sell scaffolding materials, and dishonestly misappropriated materials while in a position in which he was entrusted with dominion over the Company’s scaffolding materials in the Company’s warehouse and was charged under section 408 of the Penal Code, interpreted with section 109 of the Penal Code. The accused was sentenced to a total of 9 months imprisonment.

The offender worked as a delivery driver for a business that sold salted egg potato chips and fish skin. Daily responsibilities included going to the company’s outlets to collect cash sales and return the cash to the plant manager. Through their WhatsApp group discussion, the accused would tell his boss of the money received from each store. The accused collected the cash sales on September 7, 2016, but did not return the money. He made several reasons to gain time since he had stolen monies to pay off unlicensed moneylender bills. The court after going through all the facts and circumstances of the case sentenced the accused to 6 weeks imprisonment.

As part of his responsibilities as a hotel front desk executive, the accused was entrusted with cash held in the case box at the front desk counter drawer. On December 1, 2013, at 7 p.m., a sum was discovered stolen from the cash box. The accused was meant to be on duty at the time, but he was not there. The CCTV tape was analyzed, and it revealed that the accused was tampering with the drawer containing the cash box at 6 p.m. He was then observed leaving the hotel and never returning to work. The court sentenced the accused to 5 years imprisonment with 12 strokes of the cane on each of the three charges which were armed robbery, criminal breach of trust, and failing to report for the urine test.