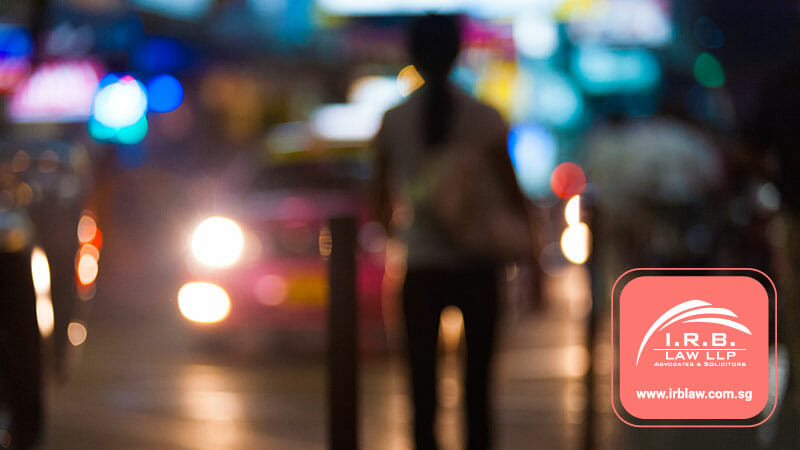 The answer, that may surprise visitors who are used to Singapore’s squeaky clean image, is yes, there is legal prostitution in Singapore. There are government-regulated brothels where foreign and local women legally offer sexual services to customers. These women are required to carry health cards and to undergo regular medical check-ups. Singapore’s pragmatic approach to prostitution meant that it was decided that it was better to legalized such activities to allow for closer government supervision, rather than to drive it completely underground.

Note that all references to prostitution in this article relate to commercial sex between a male and a female. Currently, all forms of male-male (including transgender males) sex in Singapore remain criminal offences under Section 377A of the Penal Code.

The government-regulated brothels are not the only place where such services are offered. Karaoke lounges and massage parlours are some of the common places where one might be offered sexual services for a fee. Would-be customers should beware though, as these are likely to be illegal operations. Other prostitution-related activities that are illegal in Singapore include public solicitation, living on the earnings of a prostitute and maintaining an unlicensed brothel.

Even with strict regulations and licensing to protect the trade from minors and to ward off criminal involvement, new ways of offering illegal prostitution are appearing all the time. The increase in the use of social media and the internet as an avenue to offer illegal prostitution caused lawmakers added Section 146A to the Women’s Charter to outlaw the practice of illegal prostitution even through the use of internet websites. Undeterred, sex workers and their accomplices attempt to websites hosted outside of Singapore to circumvent these new laws.

In this article, we review some of the regulations and issues relating to the paid sex trade in Singapore.

Clients paying for sex with minors

2012 saw one of the most infamous headlines in Singapore newspaper history, in which 48 men were charged in an online underage prostitution scandal, which involved high-profile executives and civil servants such as Swiss expatriate Juerg Buergin, 40, a former executive director of operations at UBS AG, Howard Shaw, 41, high-society figure and grandson of Runme Shaw, co-founder of cinema and property empire Shaw Organisation.

Under section 376C of the Penal Code, Singapore Citizens or Permanent Residents who engage in commercial sex with persons under 18 will still be liable even if the acts were done outside of Singapore.

If you pay for sex with a minor, not knowing that he or she is a minor, can you plead mistake or ignorance as a defense?

Pimps, living on the earnings of a prostitute and managing a brothel

Living on the earnings of the prostitution of another person, commonly known as pimping, is one of the many illegal acts related to prostitution in Singapore. These illegal acts along with others such as managing a brothel are documented in Part XI of the Women’s Charter.

Pimps may be punished under Section 372 of the Penal Code, for selling minors for the purposes of prostitution. ‘Minors’ under this section are defined as persons under the age of 21 years.

In the online vice ring case of 2012 that made headlines, 39-year-old pimp Tang Boon Thiew had recruited 19 escorts, 17 of whom provided sexual services and earned about $371,450 for Tang. The only minor was a 17-year-old student whom Tang represented on the website as 18. Tang had asserted that he did not know her actual age and had assumed she was already 18 since she had used her elder sister’s identity card to lie about her age. He claimed he came to know her true age a week after she had begun working for him in September 2010. For the next few months he continued to live off her substantial earnings from prostitution by perpetuating the fiction that she was already 18, said Senior District Judge See Kee Oon. Tang was sentenced to 58 months in jail and a $90,000 fine.

In  2016, 38 year old Chew Tiong Wei, the former owner of a now-defunct social escort agency, was jailed for seven years and one month and fined $130,000 for 25 criminal charges, which included living off the immoral earnings of prostitutes, having sex with a minor, having commercial sex with underage prostitutes and making obscene films. In passing sentence, District Judge Lim Keng Yeow pointed out that Chew’s offences had involved underage girls, some as young as 15.

Soliciting by prostitutes is prohibited under section 19 of the Miscellaneous Offences (Public Order and Nuisance) Act, which states that “Every person who in any public road or public place persistently loiters or solicits for the purpose of prostitution or for any other immoral purpose shall be guilty of an offence”. A first offence results in a maximum fine of $1,000, and a second or subsequent conviction results in a maximum fine of $2,000 and/or the maximum jail term of 6 months.

Sex workers may be prosecuted for plying their trade publicly, even in a red-light district, under Section 294(a) of the Penal Code for doing ‘any obscene act in any public place’ by imprisonment of a maximum of 3 months, and/or a fine.

Unlicensed brothel operators can be given a maximum fine of $10,000 and/or up to five years’ imprisonment. Any person who knowingly lives wholly or in part on the earnings of the prostitution of another person can be jailed for up to five years and fined up to $10,000.

But what about soliciting and promoting a brothel online? Under the amendments in 2016 to Section 146A of the Women’s Charter, it is now an offence for a person in Singapore to operate or maintain in Singapore, in the course of business, a remote communication service (such as a website) that offers or facilitates the provision by a woman or girl to another person of sexual services in return for payment or reward, or that organises, manages or supervises the provision of such sexual services. Any person regardless of his or her occupation, who sets up a website in contravention of section 146A will be liable on conviction to a fine or to imprisonment or both.

“The rise of online media has allowed vice syndicates to take their business online to widen their reach to clients while hiding behind the anonymity of the Internet,” said Minister for Social and Family Development Tan Chuan-Jin.

“The proposed amendments will enhance the Police’s levers to address online vice. They will make it an offence for persons in Singapore to operate or maintain in Singapore any website or other remote communication services that offers or facilitates the provision of sexual services in return for payment. They will also enable the Police to take action against a person who aids or will aid the prostitution of another person by providing any service, such as setting up a website to advertise such services, and who receives any gratification, whether cash or in kind, for providing that service.”.

To address a wider scope of illicit activities relating to illegal prostitution, a new subsection of section 146 adds: “(1A) Any person who knowingly solicits, receives or agrees to receive any gratification as an inducement or reward for providing any service, and who by providing that service does or will aid the prostitution of another person (being a woman or girl), shall be guilty of an offence and shall on conviction be punished with imprisonment for a term not exceeding 5 years and shall also be liable to a fine not exceeding $10,000.”

Gratification is defined as:

What Is truly legal In Singapore’s prostitution trade then?

At present, only sex workers operating within licensed brothels and their customers are within the confines of the law. All other forms of prostitution in Singapore are probably illegal and may be subjected to raids and persons involved may be prosecuted for various offences.

I.R.B Law Partner Muntaz Binte Zainuddin explains why you should always consider hiring a specialist criminal lawyer if you’ve admitted to a crime.