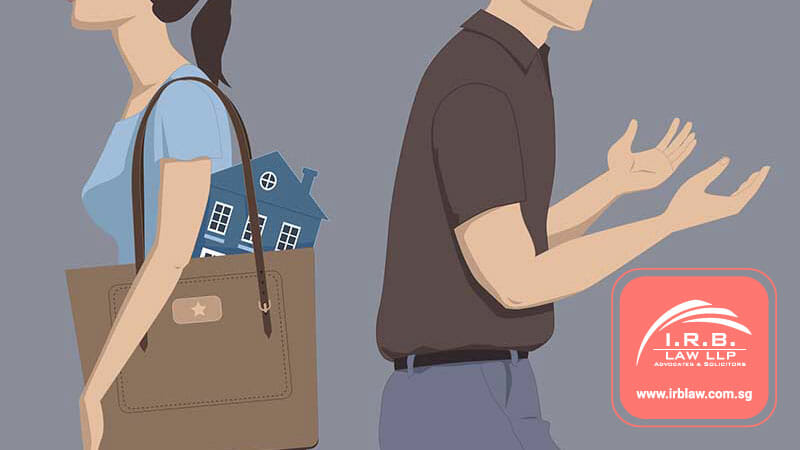 After countless quarrels and disagreements, you have decided to divorce your spouse. But now you are unsure of what to expect as you start your divorce process in Singapore. Don’t worry I.R.B. Law LLP is here to help you make sense of what is happening and what you can expect.

Should I fight over a Divorce?

If your marriage cannot be salvaged and both you and your spouse cannot seem to make things work no matter how much you try, then it appears that divorce is inevitable.

Any lawyer worth his or her salt should advise you that fighting over the grounds of divorce or what is to be said in trying to bring the divorce to an end should be kept brief. There is little use spending money, time and effort arguing how the divorce is brought to an end. You will end up spending a lot more time. money, and the emotional roller coaster ride is just not worth the effort. Where you should fight for your rights is in the ancillary matters.

Your assets and children are your future. We at I.R.B. Law LLP know that your children are the most important beings in your life and you only want the best for them. But sometimes in Singapore, the best is not free or even cheap. The cost of Milk powder or schooling is not cheap, and opportunities don’t come by so often without the assistance of some money.

This is why we believe that how you fight for your share of the matrimonial assets is important. It is these very assets that give you the opportunity to get back up on your feet after a divorce and to ensure that your children have the best possible chance of being successful in Singapore.

What are Matrimonial Assets?

In other words, matrimonial assets include:

Common examples of matrimonial assets: family cars, pets, paintings, shares, bank savings, businesses, jewellery and the cash balance in the couple’s Central Provident Fund. Another major matrimonial asset is the matrimonial home, in which the couple and their children lived during the marriage.

What about Gifts given during a Marriage in Singapore?

There are two types of gifts worth noting that play a role in the division of matrimonial assets. Inter-spousal re-gifts are things that are bought from an inheritance or a third party gift and gifted by one spouse (donor spouse) to another. For example, a husband inherits a sum of money from kin, and he uses part of that money to buy a diamond necklace for his wife during the marriage; the diamond necklace would not count as a matrimonial asset because it does not fall under the definition provided by the Women’s Charter.

The only situation in which a pure inter-spousal gift is not categorised as a matrimonial asset is when it is considered de minimis. Such items usually are of personal nature and whose value is too little to add to the total sum of matrimonial assets (e.g. dresses and small jewellery). For example, in the case of Tay Ang Choo Nancy v Yeo Chong Lin, the High Court ruled a gifted jewellery, saying it was not worth enough to add significantly to the net sum of assets; the range of the jewellery’s worth had to be in the range of a quarter million to a half million in order to make an impact in their total pool of the matrimonial assets, which amounted to S$116,560,000. In this case, the Court had the discretion to exclude jewellery from the sum of matrimonial assets.

What is the role of the Court in a Divorce?

When granting the judgement of divorce, the Court has the power to order a division of matrimonial assets between the former husband and wife. In overseeing such cases, the Court’s primary duty is to present a fair and reasonable allotment . Under Section 112 of the Women’s Charter, the Court weighs the following aspects of the former marriage:

Regardless, it should be noted that the proportions for the division of matrimonial assets are determined on a case-by-case basis.

How are assets divided in Singapore? How does the Judge know how much to give me?

Though it is the sole goal of the Judge to allot what is fair to each party, there still is a structure to which the Courts adhere.

In spite of the systematic nature of the structure, the Court realises there is a potential for unrecorded or dishonest statements, so the numbers serve as only a loose guide for the outcome. The particular facts of the case, as well as the sound assessment of credibility, play dominant roles in the final jurisdiction.

What are some of the factors that the Singapore Courts takes into consideration when dividing assets in a divorce?

Some facts the Court considers when trying to balance the outcome are the following:

To aid with settling the division, the Court may exact one or more of the following orders:

These factors are in taken into consideration with other factors listed above to ensure the division is fair and reasonable.

Can I Keep my HDB flat?

Under the HDB’s policy for divorce, the divorced party who has the custody of the child (as well as care and control) is permitted to keep living in the flat. If the pair have no children, the flat owner may keep the flat under the Single Singapore Citizen Scheme: he or she is a Singapore citizen who is at least 35 years old, and the matrimonial flat must be a resale flat purchased from the open market without the CPF Housing Grant for Family. This is subject to HDB’s Policies and Rules and Regulations.

What if I think my spouse didn’t disclose all assets?

Both parties are supposed to fully and honestly disclose all known assets they possess, so if you have reasonable grounds for believing your spouse did not do so, you may request a full disclosure during the interrogation portion of the Court procedures. If your spouse is hiding assets, the Court may grant you a bigger part of the matrimonial assets.

What is the Division of Matrimonial Procedure procedure in Singapore?

After the divorce happens, the Court will fix a date for an Ancillary Matters Pre-Trial Conference, which is where a Deputy Registrar informs the former spouses on how the Court will divide matrimonial assets.

If the Registrar deems there to be a possibility for a settlement that does not involve the court, he or she may refer the former couple to counselling or mediation. Otherwise, the Deputy Registrar will ask both parties to file an Affidavits of Assets and Means.

Then a contested ancillary matters hearing will take place during which the case will be heard in either Family Court of High Court (if the net matrimonial assets value does not surpass S$1.5 million).

How we can assist you

The division of matrimonial assets can be tricky, as there are many different factors that shape the final allotment that is owed to you. Our team of lawyers at I.R.B. Law LLP can relieve you of your stress by explaining everything about your case thoroughly and guide you through the various steps.

Should you wish to seek assistance with any matters concerning family law in Singapore. Please do not hesitate to contact us, the first consultation is usually free, and we hope to hear from you at +65 6298 2537 or email us at [email protected]