Responding to a Cease and Desist Letter 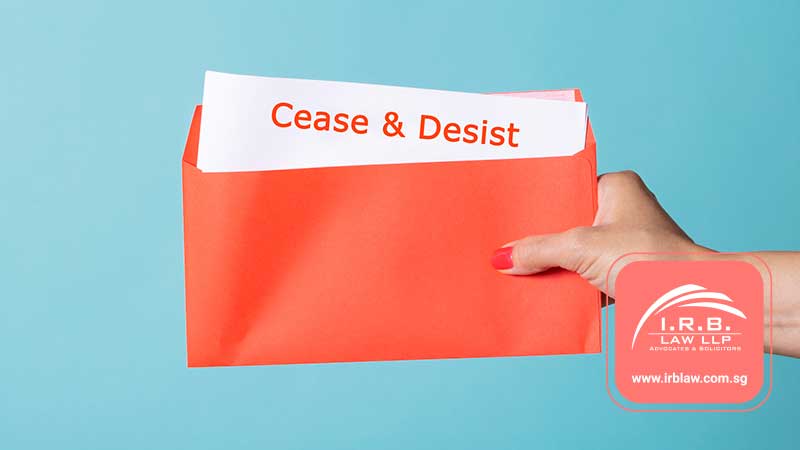 Receiving a cease and desist letter can make many of us immediately alarmed, even without reading, and there is an actual reason for that. The persons or the company, who instructed lawyers to issue such a letter, consider that you interfered with their rights and are demanding that you cease the violation immediately and/or also compensate them for damages caused by such violation.

At the same time, it should always be remembered that any cease and desist letter in Singapore reflects the sender’s private opinion on the matter. It might well be the case that the sender is attempting to infringe on your rights or simply claim possession of a right or property without legally having such a right.

You can receive such a letter in various situations, for example, when an agency claims they own the logo you used for your company branding or when a corporation asserts that your comment on social media is defamatory of their reputation and caused them losses. In any situation, no matter how insignificant this claim might seem at first glance, it’s advisable to show the letter to an experienced lawyer.

Often a cease and desist letter is prepared by the sender’s lawyers who have analyzed your legal standing vis-à-vis the sender and is ready to proceed with further legal actions against you, including a claim in the court for an injunction or damages should you fail to comply with the demand in the said cease and desist letter. A lawyer hired by you will be able to evaluate the claim and prepare a reasoned reply, and such an action may be the most cost-effective way to protect your legitimate rights and avoid protected litigation.

Cease and Desist Letter vs. Summons to the Court

In many cases, when recipients read the words ‘Cease and Desist’ in a formal letter, they confuse it with a court summons.  A cease and desist letter is just a tool to start a dialogue with the other party before proceedings are begun in court by the sender.s. We have identified the main aspects of cease and desist orders and summons to the court in Singapore to help you understand the difference:

Evaluating a Cease and Desist Letter

The first step of handling any cease and desist letter is to evaluate it. You should clarify:

In many situations, if you want to be sure that you have got the right answers to the above, you will need to have an understanding of the relevant regulations in Singapore. Thus, having a preliminary consultation with a knowledgeable lawyer can help to set the matter on the right track from the very beginning.

Responding to Cease and Desist Letter

After you and your lawyer have evaluated the alleged claims, it is the time to prepare a response. Some cease and desist letters require a response within a specified period while others do not require action within a time frame, but it is advisable to react as soon as possible to prevent further legal action on behalf of the sender.

Thus, if the senders’ claims are valid, there are several options, such as:

How a Lawyer May Help

As can be seen from the above, many of the options, such a rejecting a cease and desist letter or filing a claim on your side, would call for a consultation with a lawyer to check your legal standing as well as that of the senders.

In many situations, you will also need to have evidence to prove your case should it go to trial. You will need to take screenshots of social media conversations, copies of documents, images, and/or emails and other communication, such as text or voice messages. Your lawyer would advise you on a proper way to gather and keep the evidence so that it’s ready to be presented when needed.

There are various scenarios of what to do if you have received a cease and desist letter in Singapore, and just ignoring such a letter is not the best option as it leaves the aggrieved party with no other choice but to use other legal actions. The only exception is when their demands are entirely null and void, but only a lawyer would be able to give you a definite answer to that.

In any case, it is recommended to immediately get in touch with a lawyer whenever you receive a cease and desist letter in Singapore. An experienced lawyer will help you to evaluate the legitimacy of claims against you and outline of possible legal defenses to settle the dispute with minimal concessions on your side.