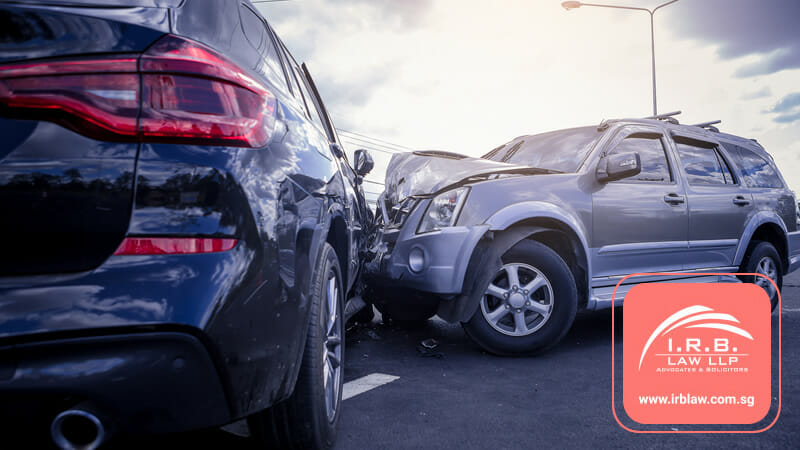 Traffic rules and regulations are there to protect not just pedestrians but also fellow motorists on the road. The Road Traffic Act 1961 governs traffic laws and regulations. Other than providing for various traffic offences, the Road Traffic Act also provides for the duties of motorists when they are involved in an accident. These duties aim to safeguard the victims of the accident and also attract severe penalties if such duties are not performed.

Duty to Stop in Case of Accident

What does “Particulars” Mean?

Section 84(2) of the Road Traffic Act states that the driver of the motor vehicle which caused the accident must report the accident to a police officer or at a police station as soon as reasonably practicable but within 24 hours after the accident has occurred. The driver does not need to perform this duty only if:

1) The driver has provided his particulars to a person who was present at the scene of the accident; or
2) The owner of the damaged vehicle or structure has contacted the driver.

Injuring or Causing Death to any Animal

If an accident occurs owing to the presence of a motor vehicle on a road and such accident results in injury or death to any animal, the driver of the motor vehicle must stop the vehicle if they have reasonable grounds to believe that:

1) The animal has an owner.
2) The presence of an injured or dead animal on the road is likely to put other road users in danger.

Section 84(2B) provides for some additional duties of the driver if such an accident resulted in injury or death to any animal. These duties are:

1) If any person at the scene of the accident requests the driver’s particulars having reasonable grounds to do so, the driver must provide his/her particulars to such person.

2) If no such person is present at the scene of the accident, the driver must take reasonable steps to inform the owner of the injured or dead animal, if any, of such injury or death caused to the animal, and must also provide that owner with his/her particulars.

3) If the presence of the injured or dead animal is likely to pose a safety hazard to other road users, the driver must take reasonable steps to alert other road users, as far as circumstances permit, of the obstruction and also must immediately inform a police officer of such obstruction.

Subsection (3) of section 84 states that if any accident occurs owing to the presence of a motor vehicle on a road and the accident causes the death of a person or causes injury or damage to a person, vehicle, structure, or animal, the driver of the motor vehicle must:

When an accident occurs as a result of the presence of a motor vehicle on the road, and any person is killed or seriously injured, or serious damage is caused to any vehicle or structure, a person must not move or otherwise interfere with any vehicle involved in the accident or any part of the vehicle, or do any other act that would destroy or alter any evidence of the accident except under the authority of a police officer. The exceptions to this duty are:

1) A car or any component of a vehicle may be moved as far as necessary to rescue people or animals trapped within, remove mail, prevent fire, or avoid damage or hindrance to the public.

2) Under the supervision of a police officer, products or passengers’ luggage may be removed from a vehicle.
This is mentioned under subsection (4) of section 84. Subsection (4) does not apply if it is urgently crucial to transport a seriously injured person to the hospital and no other adequate mode of transportation is available, other than the vehicle involved in the accident.

Section 84(7) states that any individual who fails to comply with any of the provisions under section 84 commits an offence. Any person who commits an offence for failing to comply with rendering assistance as mentioned under subsection (3) and if such person as a result of the accident causes death or seriously injures another person, such person shall be liable to the following punishments if convicted:

Disqualification from Holding or Obtaining a Driver’s License

Subsection (9) of section 84 states that if a court while convicting a person for non-compliance satisfies itself that such person while driving or attempting to drive at the time of the accident caused death or serious injury to another person and unless for special reasons it thinks fit to order otherwise, it can make an order to disqualify such person from holding or obtaining a driver’s license:

The victim was riding his motorbike in the innermost lane of a three-lane expressway. The appellant was driving in the middle lane, while the prosecution’s principal witness, Lee, was traveling on the far right. Lee witnessed the appellant’s automobile veer to the left and struck the motorbike from behind as both cars were approaching a bend on a flyover. The crash threw the rider off the bike. The motorcycle was then dragged for a few seconds before colliding into the metal roadside barrier and tumbling over. The appellant did not stop. The appellant’s automobile was pursued by Lee. He blasted his horn and motioned to the appellant to stop when he caught up with him. The appellant came to a complete stop roughly 500 meters from the accident scene. Lee stepped out of his car and asked the appellant a few questions before asking him to alight and return to the accident scene on foot. This was done by the appellant, who was joined by Lee. Others were assisting the victim at the scene of the collision. Although the appellant offered to call an ambulance, he was informed that one had already been dispatched. He then awaited the arrival of the police. The district judge convicted the appellant on four charges under the Road Traffic Act including failing to stop after an accident under section 84(1) and failing to render assistance to the victim who suffered serious injuries, under section 84(3) read with section 84(7). The punishments for these offences were to run consecutively, totaling a $2,000 fine, six weeks in jail, and an 18-month disqualification. The appellant challenged his conviction as well as the sentence imposed. After considering all the facts and circumstances of the case, the court dismissed the appeal in respect of three charges but set aside the conviction and sentence where the removal of the vehicle charge was concerned.

The respondent driver failed to keep a good watch ahead at a signalized cross-junction and collided with a motorbike that was traveling in front of his automobile. The motorcycle’s rider and pillion rider were both seriously injured when they tumbled to the ground. The respondent paused to glance back but ultimately drove away. He was eventually apprehended at a traffic intersection. He had 77g of alcohol in every 100ml of breath, according to a breathalyzer test. During the trial, the respondent pleaded guilty to two offences, including failing to render such assistance as was reasonably within his capacity to render following an accident in which his automobile injured others. The prosecution filed an appeal against the sentences, alleging that the $3,000 fine and two-year disqualification for the section 67(1)(b) offence and four weeks’ imprisonment and three-year disqualification for the section 84(3) offence were manifestly inadequate. The Prosecution requested that the former charge receive a custodial sentence and the latter charge receive a lengthier prison term. The court allowed the appeal solely on the first charge and overturned the district judge’s punishment of a $3,000 fine and a two-year disqualification period for drink-driving and replaced it with two weeks in jail and a three-year disqualification period. It also ordered that the two-week term run consecutively with the four-week sentence imposed for the hit-and-run offence.

The respondent was driving over the speed limit. He failed to slow down as he approached a signalized intersection and collided with an elderly pedestrian, Mdm Pang, who was crossing at the signalized crossing. The accident flung Mdm Pang some 27 meters ahead and dislodged the car’s front registration plate. Following the incident, the respondent pulled over some distance away from the site and, noticing Mdm Pang laying still on the road, drove away without assisting her. Mdm Pang was found unconscious and bleeding on the forehead and mouth by the police officer who was dispatched to the spot. The car’s front registration plate was also discovered at the site. Mdm Pang was later taken to Singapore General Hospital and pronounced dead. The respondent handed himself over to traffic officers and was arrested. The respondent turned out to be the beneficial owner of the automobile, having paid $20,000 for it. The automobile was registered in the name of someone else because the respondent was an undischarged bankrupt. The respondent pled guilty to causing death by a rash act under Penal Code section 304A, driving while disqualified under Road Traffic Act section 43(4), and failing to render assistance after a fatal accident under Road Traffic Act section 84. The respondent was sentenced to one year in prison by the District Judge, and the prosecution appealed. The appeal was allowed by the court, and the respondent was sentenced to a total of 48 months imprisonment with a 10-year disqualification from holding or obtaining a driver’s license.