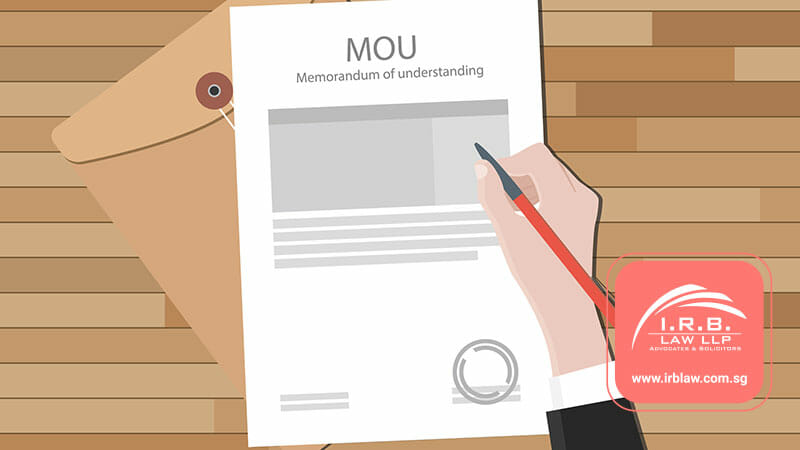 When two or more companies are negotiating the terms and conditions of a commercial transaction, such as a joint venture or partnership, they often need an instrument to fix the in principle interim arrangements, communications, and concessions achieved during the negotiation process before signing a final contract.

Such an instrument comes in handy when the parties, would like to avoid renegotiating main terms each time the parties meet as well as to have some binding clauses for, at least, confidentiality, non-compete, or other obligations. One of the common ways to do so is to have a memorandum of understanding (“MOU”) signed between the parties before signing a final contract.

Sometimes, the label of the MOU is used interchangeably with other titles, for example, a term sheet, memorandum of agreement, or a letter of intent, although in Singapore, the latter is most often used in the context of renting a property. That being said, a memorandum of association can be best viewed as a non-binding agreement to agree (except for certain clauses), setting the framework for the negotiations and concluding a final agreement.

Below are the descriptions of the contexts when MOUs are used most often, general descriptions of basic terms to include as well as a list of cases when MOUs can be considered binding despite their generally non-binding nature. To account for individual situations, you are advised to consult with experienced lawyers to make your MOU work for the purposes intended and to avoid unexpected claims from the parties to the MOU.

What is the Purpose of MOUs

In order for the Memorandum of Understanding to be effective, it shall include, among others:

While some of the clauses such as names of the parties, validity period, and signatures are self-explanatory, others are worth separate mention.

Usually, the parties want to set up the non-disclosure and non-compete clauses as they can be disclosing proprietary commercial information during negotiations. Having such terms in an MOU helps to ensure that such data is not disclosed to third parties and not used to gain unfair advantage in competition, notwithstanding the outcome of the negotiations.

The answer to the question of whether Memorandums of Understanding are binding depends on the original intent of the parties and whether they were able to provide for it in the text of the document.

Generally, MOUs are not considered legally binding and intended as an intermediate tool to facilitate concluding the main agreement.

Still, in many cases, MOUs are binding in the scope of non-disclosure, confidentiality, and or non-compete terms as the parties are interested in protecting their proprietary and financial information notwithstanding the outcome of negotiations.

However, the MOU may be considered binding by the Courts of Singapore in certain circumstances. In this situation, an aggrieved party may file a lawsuit for damages should the other party decide to breach the agreement.

MOUs are useful tools while negotiating contracts such as joint ventures or acquisitions, helping to set up a general framework for negotiations.

An experienced lawyer will facilitate the drafting of an MOU, making sure it includes all the essential terms and provides for enforceability/non-enforceability as well as other desired outcomes depending on the original intent of the negotiators.